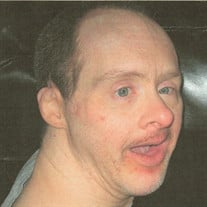 Oct. 27, 1962 — July 20, 2016 Ryan Farmer, 53, passed away peacefully in his favorite spot at home on Wednesday, July 20, 2016. Ryan was born on Oct. 27, 1962, to Mary and Maurice “Lefty” Farmer. Ryan grew up in Albany with his parents, three older brothers, Rainer, Revere and Rogue, and his stepsister, Nancy. As a family, they enjoyed traveling and going on vacation in their motor home. Ryan lived with his parents until they could no longer care for him. In 1997, Ryan moved into Benco’s care and resided at the 29th Street Program. He remained in close contact with his family who were very important to him. Ryan continued to visit his parents every Monday and Friday night; every Thursday night, Ryan’s mother, Mary, would make him brownies and yogurt, and he would go and visit on Fridays. One of Ryan’s favorite activities was to go watch and listen to his dad’s jazz band play music at the Eagles. Even after his dad, Lefty’s, passing, Ryan loved listening to jazz music and it always filled the walls in his home. Ryan loved his family and having family visitors. He was preceded in death by both of his parents and his brother, Rainer. Ryan had an infectious smile and enjoyed lounging on the couch manipulating his rubber tubes and chewing socks. He loved changing his clothes many times throughout the day, holding hands, leaning into staff and leading others around the house. Having chocolate and yogurt and going on long scenic car rides with the sun beaming down made his day. Ryan is survived by his brothers, Revere Farmer and Rouge Farmer; sister-in-law Penny farmer; half-sister Nancy Cullen; nephew Tyler Farmer; and niece Vanessa Farmer. Ryan has gone to his eternal home to reunite with his parents and brother. A memorial service to honor Ryan will be at 11 a.m. Wednesday, July 27, at DeMoss-Durdan Funeral Home, 815 N.W. Buchanan Ave., Corvallis. Memorial donations in lieu of flowers made be made to Benco, 165 N.E. Conifer Blvd., Corvallis, OR 97330.

The family of Ryan Douglas Farmer created this Life Tributes page to make it easy to share your memories.