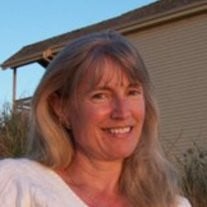 Sandra Celeste Cleveland (Sandy) of Blodgett, born October 3, 1957, peacefully passed away surrounded by her family, at her home on Tuesday, September 10th 2013 at the age of 55. Sandy was born in Lebanon Oregon to Art and Diane Eatherton, and grew up in Philomath Oregon. She graduated from Philomath High School and found a passion for track and field there. It was also at this time Sandy met her high school sweetheart Tim Cleveland. Tim and Sandy were married by Pastor Roy Semmel on April 16, 1977 at Blodgett Community Church. They started a life together in Burnt Woods, and later bought a house in Blodgett where they started their family. They had three children that Sandy loved and adored, she was their greatest supporter. As her kids grew up she began working at the Philomath Middle School, this too became a passion. The love and friendships she found there will never be broken, and the confidence she gained from her work there, provided a deep satisfaction. Sandy was an incredible woman who will be missed deeply; She is survived by her husband of 36 years Tim Cleveland, daughter Heidi Cleveland, son Chad Cleveland and wife Krista, daughter Jamie Beelart and husband Levi, mother Diane Eatherton, brother Randy Eatherton and wife Bernie, and grandchildren Ava and Cru. Sandy was a Christian with a big heart and a gentle soul. She was a loving wife, mother, and daughter with a passion for all things family. Although the last four years of her life were consumed by a battle with cancer, she chose to never stop living. Perseverance and determination were in her heart, welcoming each day with a positive attitude, she led by faith, and surpassed expectations. She will be missed dearly by all that knew her. A memorial service for Sandy will be held for close friends and family. Thank you to Benton Hospice Service for providing incredible support and guidance for Sandy and her family during the last stage of her life. Also to the many church families and friends who provided continual support both in prayers and love. Any donations can be made to the Blodgett Community Church Library as it was one of Sandy’s many passions and ministries.

Sandra Celeste Cleveland (Sandy) of Blodgett, born October 3, 1957, peacefully passed away surrounded by her family, at her home on Tuesday, September 10th 2013 at the age of 55. Sandy was born in Lebanon Oregon to Art and Diane Eatherton,... View Obituary & Service Information

The family of Sandra Cleveland created this Life Tributes page to make it easy to share your memories.