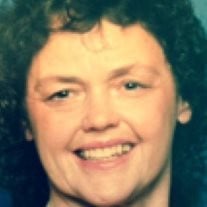 Oct. 8, 1941 — Feb. 12, 2014 Sandra Parsons, 72, of Corvallis died Wednesday in Corvallis. Sandra was born in Salt Lake City, Utah, to Ross Dee Holmes and Ruth Holmes. Her father was a millwright and moved the family to Branscomb, Calif., for work when Sandra was 6 years old, later moving to Laytonville, Calif., Willits, Calif., then Cloverdale, Calif. Sandra graduated from Cloverdale High School, where she met Leon Parsons, whom she later married. The couple then moved to San Jose, Calif., where Leon worked in construction for many years, and where they had their three children. In 1977 the couple moved their family to Corvallis, where the family enjoyed extensive camping and fishing trips together. Sandra loved the outdoors, especially summers; she enjoyed boating and water-skiing. She always made time for her daily walks, and was a talented seamstress. Sandra was a lifelong member of the Church of Jesus Christ of Latter-day Saints; she especially enjoyed being the director of the Camp Alpine, the girls’ church camp, for three years. Survivors include her sons, Robert Parsons (Jackie) of Corvallis, and Jeremy Parsons (Melissa) of Seattle, Wash.; her brothers, Danny Holmes (Kathy) of Lebanon, Jim Holmes of Willits, and Howard Holmes (Birdie) of Casper, Calif.; her sisters, Suszann Overton (Howard) of McPherson, Kan., and Julia Wing (the late Lenny) of Lehi, Utah; three grandchildren, Ashley, Alicia and Cody Parsons of Corvallis; and a great-granddaughter, Olivia Parsons. She was preceded in death by her mother, Ruth Amidan; her father, Ross (Bud) Holmes; her daughter, Kathie Butler; and her husband, Leon Parsons. Services will take place at 1 p.m. Feb. 18 at the Church of Jesus Christ of Latter-day Saints, 1205 N.W. Walnut Blvd., Corvallis, OR 97330.

The family of Sandra Parsons created this Life Tributes page to make it easy to share your memories.