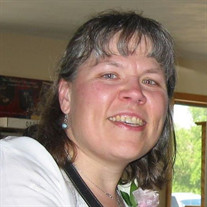 Nov. 3, 1960 — Dec. 27, 2015 Sharon Kay Krueger, born Nov. 3, 1960 in Wausau, Wisconsin, was called to her eternal home on Dec. 27, 2015. Sharon was the youngest child of Lillian and the late Ruben Krueger. She grew up on the family farm in the township of Maine, helping to raise dairy cattle and ginseng. Sharon is survived by her mother Lillian Krueger; brother Randy (Marilyn) Krueger and their children Andrew (Megan) Krueger, Rebecca (Bob) Myszka, and Katie Krueger; sister Sandra Krueger; brother Daniel (Susan) Krueger and their children Danny (Bonnie) Krueger, Luke (Beth) Krueger, Jacob Krueger, and Leah (Brad) Buffinton; and her best friend Ruth Martin. Sharon graduated from Wausau West high school in 1979, completed her Bachelor’s and Master’s degree in Plant Breeding at the University of Wisconsin in Madison, and then moved to Oregon in 1987 where she completed her Ph.D at Oregon State University. She remained in Corvallis and was employed at the University for the rest of her career. In 1993, Sharon worked as a post-doctoral researcher in David Williams’ laboratory where she quickly developed a keen interest in drug metabolism research, particularly the flavin-containing monooxygenase or FMO enzyme and its impact on human drug metabolism and toxicology. Over the next 22 years in the Williams’ lab, Sharon was promoted first to research associate then became a research assistant professor at the Linus Pauling Institute, Oregon State. She authored over 30 peer reviewed journal articles and several review articles, including the most cited FMO publication to date. Recently she was cited in the prestigious journal, Science. Sharon was a co-investigator on nine funded research grants. She was a member of the International Society for the Study of Xenobiotics, Pacific Northwest Association of Toxicologists, and Society of Toxicology. She mentored many, many undergraduates and was instrumental in enhancing their understanding of scientific investigation, directing them toward rewarding careers beyond graduation. Her research interests were always expanding and her inquisitive nature and willingness to try new techniques kept the lab abreast of the fast changing approaches to research. In addition to all her scholarly activities, Sharon was a member of the Commission on the Status of Individuals with Disabilities and the building access sub-committee, the Accessible University Initiative Task Force, and the Accessible University Advisory Committee. Most recently Sharon was expanding her talents in her new roles as the research clinical coordinator for the Linus Pauling Institute and Environmental Health Sciences Center as well as the research coordinator for the OSU Superfund Research Center administrative core. During her free time, Sharon loved to experiment in the kitchen. She published a cookbook with many of her favorite recipes, “Inspired by Pompe, High Protein Reduced Carb Cooking”, as a fundraiser for The Acid Maltase Deficiency Association. Every year she made a special fruitcake that people looked forward to at the holidays. She also enjoyed traveling and had the opportunity to visit Wisconsin, Yosemite, Mount Rainier and Crater Lake National Parks in recent years. She would not miss her annual trips to the iris, tulip and dahlia fields, and the Oregon Garden! Sharon was constantly in awe of nature. A perfect day for her might include a walk along the Willamette River in Eugene, a visit to Finley Wildlife Refuge, a bird watching excursion to Talking Water Gardens in Albany, a trip to the ocean or to the top of Mary’s Peak for a picnic lunch to enjoy the beautiful alpine flowers. Her “happy place”, as she called it, was among the alpine flowers at Paradise in Mount Rainier National Park. Her camera was always nearby to catch the natural beauty of each day. Sharon was a people person and often planned gatherings for coffee or breakfast with her friends. She lived her life to the fullest! The manner in which Sharon attacked each new challenge that came her way, her positive attitude, and her perseverance was an inspiration to many. She will be dearly missed. In lieu of flowers, please consider donations to the Acid Maltose Deficiency Association (http://www.amda-pompe.org). A memorial service will be held at a later date in Corvallis.

The family of Sharon Lynn Krueger created this Life Tributes page to make it easy to share your memories.