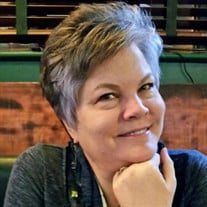 Shawna Dawn (Hutchinson) Bell October 24, 1961 – February 5, 2022 Shawna Dawn (Hutchinson) Bell, 60, died peacefully at her home in Corvallis Saturday, February 5, 2022, with the love of her life by her side. She suffered from a glioblastoma brain tumor that was discovered in late September. Shawna was born to Beverly (Dysinger) and Chester Hutchinson in Seattle, Washington, and was raised from age two in Lebanon, Oregon, where she graduated from Lebanon Union High School in 1979. She went on to earn her bachelor's degree from Oregon State University in 1984. She met her husband through a friend, and married Ron Bell August 24, 1991. Ron and Shawna lived in Sherwood for 10 years before moving to Sisters 20 years ago. Shawna served on the City Council and the budget committee in Sisters. She worked passionately — first in high tech in the Portland area, and the rest of her career working for the children of Central Oregon through the Family Access Network and the schools. Retiring from the High Desert Education Service District this past spring 2021. They moved to Corvallis at the end of April 2021 ready to enjoy life after retirement and to be closer to family. She was a loyal friend and loving family member, but her heart was all-in for her husband of 30 years. She and Ron had a connection and love that everyone could wish for. It was always “Shawna and Ron.” Shawna is survived by husband, Ron Bell, of Corvallis. Parents Beverly (Dysinger) and Chester Hutchinson of Lebanon, Oregon. Sister Pam (Hutchinson) Bielenberg and Chris Bielenberg) of Albany, along with nieces and nephews, aunts, uncles, and cousins in a close-knit extended family, including her best friend/sister-in-law, Debbie (Crick) Bell (Randy Bell) of Eugene. No services are planned. In lieu of flowers, Shawna requested memorial donations to the Family Access Network (FAN): Online at: https://familyaccessnetwork.org/donate-now/ or by mail to: Family Access Network 2125 NE Daggett Lane, Bend, OR 97701, 541-693-5675. DeMoss-Durden Funeral Home handling arrangements: 815 NW Buchanan Ave. Corvallis, OR 97330

The family of Shawna Dawn Bell created this Life Tributes page to make it easy to share your memories.