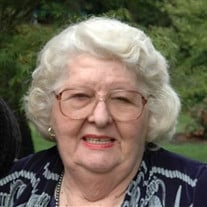 Sheila Anne Allen Sept. 19, 1930 — Sept. 2, 2014 Sheila Anne (Lorton) Allen, 83, of Albany passed away Tuesday morning, Sept. 2, 2014, at Samaritan Albany General Hospital. Sheila was born in Sutton, Surrey, England, to Ronald and Marie Lorton. She married Dennis Allen, an English policeman, in 1953. In 1963, Sheila, her husband and their four children immigrated to the United States; Sheila soon had her fifth child, in 1964. In 1978, they moved from Sacramento, California, and settled in Albany, where her husband became the local Culligan Man and Sheila continued her career as a hairdresser. Sheila loved socializing with friends and family, and enjoyed entertaining, including telling stories of her days of growing up during World War II and briefly working with Vidal Sassoon. Her hobbies included gardening, painting, reading and knitting, for which she won several awards at the Benton County Fair. While in Albany, she built lots of long-term friendships through her participation in the Teasipper Club. She is survived by her children, Jillian Collins of Lincoln, California, Elaine Allen, also of Lincoln, Bruce Allen of Albany and Ann-Marie Post, also of Lincoln; and five grandchildren, Jason Collins, Jeremy Collins, Rachel Allen, Jennifer Allen and Andrew Allen. She was preceded in death by her parents; husband, Dennis William Allen; and her son Paul Francis Allen. A celebration of life memorial will take place at 3 p.m. Friday, Sept. 19, at Albany Golf and Event Center, 155 Country Club Lane. Please share your thoughts and memories for the family at www.demossdurdan.com.

The family of Sheila Anne Allen created this Life Tributes page to make it easy to share your memories.