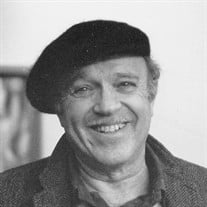 Shepard Levine, Oregon State University Professor Emeritus of Fine Arts, died peacefully at his home of sixty years in Corvallis, Oregon on June 4, 2019. He was 92. The son of Russian and Polish Jewish immigrants, Shepard grew up in New York City during the Great Depression. He played stickball in the streets but early on felt the lure of the arts—an interest that burgeoned with support from his teachers in the public schools. He interrupted his education at 16 to join the war effort. For more than two years he served in the United States Coast Guard as a radar operator, patrolling the coastal waters of the Eastern U.S. and scouring the North Atlantic for enemy submarines. His experience in the service, like his childhood in the poverty-ridden boroughs of New York, fostered a stubbornly humanistic approach to thinking about the world. With the end of WWII Shepard enrolled at the University of New Mexico in Albuquerque. There he pursued studies in the visual arts, ultimately earning a Master of Fine Arts degree. It was there that he met his future wife, Gloria, who was a graduate student in the field of Spanish and Latin American literature. They married in 1952. Not long thereafter the couple moved to the Pacific Northwest. They settled in Corvallis, Oregon, which would be their home for the rest of their lives—though with breaks for travel and sabbaticals abroad. In 1954, Shepard Levine began teaching at Oregon State College (later University) in the Art Department. Spurred by his passions for education, painting, and people, he would remain an active, esteemed, and beloved member of the faculty for 37 years, eventually achieving the status of Professor Emeritus. Natural scenes provided the inspiration for much of Shepard’s work. The arid landscapes of Israel and the mountains of Switzerland and China were transfigured in watercolors and oils. He found the Oregon coast especially compelling and delighted in taking his students there to paint. Another great source of inspiration was music. Shepard listened avidly to classical music throughout his life; it not only influenced how he conceived his art but also frequently informed its subject matter. His paintings and prints are held in both private and public collections, including the Portland Art Museum. Shepard will be lovingly remembered as a devoted, caring husband, father, and grandfather, and for his remarkable contributions as a teacher, mentor, friend, and irrepressible storyteller. He leaves his daughter, Kate and son-in-law, Marc; his son, Josh and daughter-in-law, Annette; and his grandsons, Samuel and Dorian Poitau-Levine. A memorial celebration of Shepard's life will be held 3:00 pm, Sunday, August 4, 2019 at the Corvallis Art Center, 700 SW Madison Avenue, Donations in his honor may be made to Doctors Without Borders (Médecins sans Frontières) and Lumina Hospice and Palliative Care (formerly Benton Hospice Service).

Shepard Levine, Oregon State University Professor Emeritus of Fine Arts, died peacefully at his home of sixty years in Corvallis, Oregon on June 4, 2019. He was 92. The son of Russian and Polish Jewish immigrants, Shepard grew up in New York... View Obituary & Service Information

The family of Shepard Levine created this Life Tributes page to make it easy to share your memories.