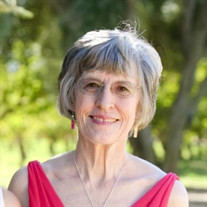 The extraordinary life of Sherry Sisson came to an end on Sunday, November 28, 2021 as a result of a bicycle accident. Sherry Smith was born on April 10, 1943, while her father served as a doctor in the US Navy. Her family moved to Eureka, CA when she was seven, and she enjoyed an active childhood as the oldest of seven adventuresome siblings. Sherry graduated from OSU with a degree in electrical engineering in 1965; the only woman in her graduating class. A lifelong athlete, Sherry was one of the early members of the women’s crew team. She played clarinet in the marching band and was proud to relay the story of her 1965 trip to the Rose Bowl, which her children found hard to believe as they suffered through season tickets to OSU football in the 1980s. At OSU, she met fellow electrical engineer Bill Sisson, whom she married in 1966. Sherry’s first job after college was at the prestigious Bell Laboratories in New Jersey, working on some of the first commercial software. While at Bell Labs, Sherry earned a masters’ degree at Northwestern. She then took time away from work to raise her sons, Mark and David. The family moved back to Corvallis in 1977 for Bill’s job with HP. As soon as her children went to kindergarten, Sherry also joined HP. She initially worked on QA and later moved into R&D on software for a portable computer. Over time, she also worked on user interfaces and ultimately helped management “keep a pulse” on engineering work until her retirement in 2005. Sherry was a Renaissance woman, pursuing interests from aviation to athletics and audiology. Along with Bill, she was an accomplished private pilot for more than 50 years. They flew all across the USA and in their later years, even flew overseas on sightseeing tours. After retirement, Sherry worked briefly as a professional pilot doing aerial surveying and volunteered to provide free medical transport via airplane for rural residents. She earned her pilot instructor’s license and stayed current with the latest flying technology. She loved the beautiful Oregon landscape from above and was always keen to take friends and relatives on flying trips. She had a lifelong passion for athletics. Sherry took up cycling seriously in her late 40s. She completed week-long Oregon Bicycle Rides with her sisters and local friends for 25 years. She also enjoyed jogging in MacDonald Forest and competing in Beaver Freezer triathlons and the Oregon Senior Games. She was proud of the fact that she could still ride a century and climb Mary’s peak, even at the age of 78. Sherry studied audiology, enjoyed amateur photography, marched in the Rose Parade as part of the OSU alumni band, learned to quilt, grew a bountiful garden, and specialized in a favorite chocolate chip oatmeal cookie recipe. She is survived by her six siblings, two sons, two granddaughters, and many friends and colleagues from throughout her life.

The extraordinary life of Sherry Sisson came to an end on Sunday, November 28, 2021 as a result of a bicycle accident. Sherry Smith was born on April 10, 1943, while her father served as a doctor in the US Navy. Her family moved to Eureka,... View Obituary & Service Information

The family of Sherry Sisson created this Life Tributes page to make it easy to share your memories.

The extraordinary life of Sherry Sisson came to an end on Sunday,...