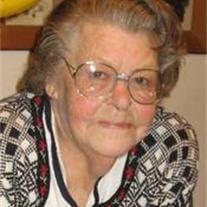 Corvallis resident Shirley E. Cook died Tuesday at Good Samaritan Regional Medical Center. She was 80. She was born in Umatilla County to Elizabeth Finley (neé Krause) of Romania and Claude L. Finley of Oregon. Shirley grew up in The Dalles. She had one brother who preceded her in death. Shirley also lived in Portland, Seaside and Corvallis. She had a varied career, working as a waitress, apartment manager and graveyard-shift clerk at 7-Eleven for many years. Shirley was very fond of animals, owning various dogs, cats, guinea pigs, rabbits, goats, sheep, peacocks, pheasants, poultry, lizards and frogs over her lifetime. Her hobbies included arts and crafts, sewing, reading, and gardening; she spent many hours working on her garden. In later years she tended an "indoor garden" of African violets, cacti and houseplants, and volunteered at the Cat’s Meow Thrift Shop. Shirley had four children with her second husband, Robert Harris Sr., and one son with her common-law spouse, Earl Cook. Shirley is survived by her children, Robert Harris Jr. of Reno, Nev., Tammy Starry of Maineville, Ohio, Alicia Harris of Jacksonville, Fla., Jerry Harris of Kent, Wash., and Peter Cook of Corvallis. She is also survived by a son-in-law, daughters-in-law, and numerous grandchildren. At Shirley’s request, there will be no services. Her family will spread her ashes at one of her beloved places. Memorial contributions can be made to Heartland Humane Society or the Cat’s Meow Thrift Shop.

The family of Shirley Cook created this Life Tributes page to make it easy to share your memories.