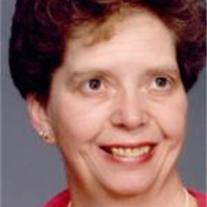 Shirley Anne Golden passed away peacefully at her home on Friday, May 14, 2010. She was born in Portland on March 28, 1935. She moved to Corvallis with her family in 1942. They lived in Claremont, Calif., in 1950 and 1951, and proceeded to Bakersfield, Calif., where Shirley was married to Granville (Goldie) Golden in 1957. Goldie was stationed in Honolulu, Hawaii, with the U.S. Navy; they lived there for three years. After his discharge in 1961, they returned stateside and permanently settled in Corvallis. Shirley worked for almost 30 years as a serials supervisor at the Oregon State University Library. In the last few years of her career, she was an assistant for the Linus Pauling exhibit. She spent several years as an officer in the Women of the Moose for the Corvallis Moose Lodge. She loved the Oregon Coast, playing Keno, reading, her pets, and spending time with her family and friends. She was known for her devotion to her family, and always being there for her friends when needed. She was preceded in death by her husband, Goldie; their daughter, Sharon Louise; her parents, Nella and Edward Krieg; brothers Albert and Bruce Krieg; and sister, Mary Patricia Eckersley. She is survived by her daughters Debbie Bell and Diana Rabago and husband, Raymond, all of Corvallis; brothers Stuart Krieg and wife, Shirley, and William Krieg and wife, Barbara; grandsons Aaron Rabago and Andrew Rabago and wife, Kathryn; and numerous nieces and nephews. A celebration of her life will take place at 11 a.m. Monday, May 24, at the Unitarian-Universalist Fellowship of Corvallis on Circle Boulevard. For those unable to attend, or anyone who would like to share their thoughts, there is an online memorial page at www.shirley-golden.memory-of.com where you can post your memories to share with others. In lieu of flowers, donations in her memory can be made to Benton Hospice Service or Heartland Humane Society.

The family of Shirley Golden created this Life Tributes page to make it easy to share your memories.

Shirley Anne Golden passed away peacefully at her home on Friday,...