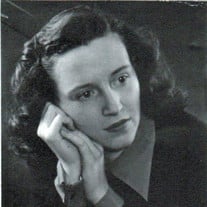 Sept. 4, 1927 — Sept. 8, 2015 Shirley Lois Griffith was born on Sept. 4, 1927, to Paul E. Griffith and Lorene Smith in Maywood, Illinois. A much-loved younger sister, Betty Jean, joined the family five years later. During her high school and college years Shirley discovered her love of the cello. She played the instrument during these years with much enthusiasm and skill. During the year of 1947-1948, Shirley moved to Nurnberg, Germany, with her family. She was a “cub reporter” for the Army and loved every minute of it. Shirley met her future husband, Hugh Wubben, at Cornell College in Mt. Vernon, Iowa, in the late ’40s. Learning that Hugh played jazz piano piqued her interest mightily in the fine fellow she met there in the print room at Cornell College. They married on Thanksgiving Day 1950. Shirley graduated with degrees in Journalism and English in June 1950. They had two children, Nancy born in 1955 and Tom born in 1958. A favorite memory of her daughter, Nancy Herron, is of handing Shirley a loaned violin some 40 years ago, and encouraging her with, “Try it! It’s got great tone!” Shirley proceeded to slowly raise the violin to her chin, bow the instrument once and with mild dissatisfaction and a shake of her head proceeded to place the lovely violin between her knees to better bow it as a cello. Luckily a camera was close at hand to capture the moment. A wonderful joint venture that Shirley and her father engaged in began in the late ’70s. Paul Griffith, born in 1899, lived during a time when incredible changes socially and technologically played out. He decided to record his memories. His autobiography extended to six volumes starting with “My Early Life” and ending with two volumes of “The Chicago Years.” Shirley and Paul carried on long distance communications Colorado to Oregon and back for a least a year. Paul was proud of his daughter’s involvement in the recording of his life events. Shirley proofread, edited and typed her father’s life story — a prodigious undertaking for them both. Shirley loved her family. It grew to include a son-in-law, Jack Herron; daughter-in-law Hilda Salinas; and seven grandchildren, Sophie, Joanna, Sean and Clara Herron, and Evonne, Shirley and Michelle Wubben. A private family remembrance will be held at DeMoss Durdan on Nov. 25.

The family of Shirley L. Wubben created this Life Tributes page to make it easy to share your memories.