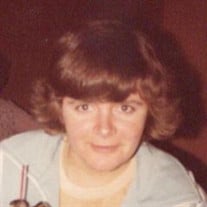 Susan Marie Huffaker November 7, 1955 – February 6, 2022 Born 3rd of 4 children to Robert (Bob) J. and Genevieve (Genny) E. (Gray) Huffaker in Corvallis, Oregon. Sue graduated from Corvallis High School in 1973 and joined the US Army in 1976. She served in South Carolina, Alabama, Kansas and Alaska. Sue spent memorable time in Germany on REFORGER. During her second stint at Ft. Riley, Kansas, Sue gave birth to Robert P. Huffaker in 1981. Sue was honorably discharged the following year, at the rank of Specialist 5. Following her discharge, Sue and Robbie moved back to Corvallis. Sue graduated from Linn Benton Community College in 1986. Shortly afterwards, Sue started working at Oregon State University, first in the Economics Department, then Telecommunications where she had planned to retire on March 1st. In 2006, Sue became a grandma to Genevieve (Genna) Huffaker, and adored Genna and Genna’s brother, Tim Dehart. Sue loved animals, especially cats, which she had for most of her life. She loved to travel, and took several trips with her childhood friend, Debbie Tornow, including a trip to the East coast, Nashville and a Caribbean cruise. She was an avid reader, loved the beach and had many spots along the Oregon coast that were special to her. Sue enjoyed spending time with family and friends. Sue is survived by her son, Robbie, granddaughter Genna, step-grandson Tim (Tori), and great-grandson, Dylan, sisters Peg (Gerry) Parks, Jan (Steve) Boggs and numerous nieces, nephews and cousins. She was pre-deceased by her parents, Bob and Genny, and brother Mike. Donations can be made in her name to the St. Jude’s Children’s Hospital, National Wildlife Federation, or the Evergreen Hospice House. Memories can be shared at www.demossdurdan.com. A celebration of life will be held March 13, 12:30 PM at Kugler Hall, Philomath City Park, 299 S 23rd St, Philomath, OR.

The family of Susan Marie Huffaker created this Life Tributes page to make it easy to share your memories.