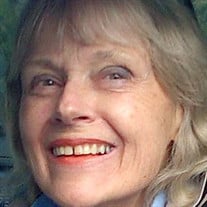 October 20, 1936 – March 12, 2015 Suzanne Iliene Turple died in the afternoon of Thursday, March 12, at the Corvallis home of her daughter, April, son-in-law, David, and granddaughter, Linnea. She was 78, and thus ended her 14-year battle with “the stuff,” as she preferred to call her breast cancer. Suzanne peacefully died with Kitty at the foot of the bed and surrounded by family. Her death quickly followed a two-month rollercoaster adventure during which time she lived with her immediate family in Corvallis. This time included many visits with friends and extended family, basketball games, walks in her neighborhood, playing basketball and soccer with her granddaughter, and exploratory car trips in north Corvallis. All adventures arguably required superhuman strength and unearthly resolve: At the end she’d been lovingly given the nickname “Viking Warrior Princess.” Suzanne Iliene Larson was born to Dorothy (Nelson) and Earl Larson. A third-generation Portlander, Suzanne attended Franklin High School in southeast Portland and upon graduation went straight to work. The early death of her mother, also a victim of “the stuff,” and other challenges throughout her life fostered Suzanne’s commitment to hard work and helping others, fierce independence and faith. These were defining tenets of her life and served as important life lessons for her family. As a young woman, when Suzanne wasn’t joining friends — and her future husband, David Turple — on mountain-climbing and skiing adventures (she climbed most of the Oregon Cascade peaks, Mount Hood several times), or riding horses, she was financially independent through her work as a stenographer for the Union-Pacific Railroad (1955 to 1969). Suzanne married David in 1963, and they had their daughter, April, later that decade. They were hardworking and adventurous together: After April was born, Suzanne focused on raising their daughter and her Arabian horses. In 1975, in a Beechcraft Bonanza, Dave flew the family on a five-week trip through small towns into southern Mexico. They camped out, sometimes in the airplane, and met incredible people along the way. Dave died in 1981 in a mountain-climbing accident on Mt. Hood while trying to save the life of another climber; Suzanne’s resolve and deep faith kept both family and farm together during this time. Later she began public relations work for Mooney Industrial, a job she immensely enjoyed until her retirement. She also joined the volunteer corps at St. Vincent Hospital in west Portland, where she logged almost 9,000 hours at the Surgery Patient Information Desk. Meanwhile, her farm continued to be a source of joy where she found particular delight in raising award-winning roses, despite the challenge of keeping the deer out of her garden beds! Her adventurous spirit carried throughout her life, and she was able to travel extensively. A highlight for her included her trip to Central America in 1996, when she spent a month in rural Guatemala visiting her daughter and son-in-law while they were Peace Corps volunteers. In 2001 she met Jim Boyle of Corvallis, who became her companion of many years and her traveling partner: They traveled to Europe, South America and innumerable places in the Pacific Northwest and Midwest. They hiked, rafted and camped, and connected with family. Another highlight was their backpacking trip into Moraine Lake in the Three Sisters Wilderness last summer with Suzanne’s daughter, son-in-law and granddaughter. Even though “the stuff” was taking its toll on Suzanne, she was there to greet her granddaughter at the climbers’ trailhead and congratulate Linnea on successfully summiting her first big peak. Suzanne taught us how to live deeply, to take every moment we are given and make the absolute most of it. She lived her life with grace, dignity, undying gratitude, rock-solid faith and incredible tenacity. And while she will be greatly missed here on earth, heaven truly rejoiced to welcome her home. Viking Warrior Princess is survived by her daughter, April Turple of Corvallis; son-in-law David Zahler; granddaughter Linnea Zahler; extended family; friends from her Bethany Baptist Church, Portland, and First United Methodist Church, Corvallis, communities; and other dear friends, many going way back, who felt the blessing of her friendship.

The family of Suzanne Iliene Turple created this Life Tributes page to make it easy to share your memories.