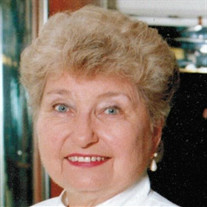 Swanhild Annette Hoidahl Carlson Swannie Carlson, 87, passed away peacefully in her sleep in the early morning of Jan. 17, 2016. She had suffered a stroke in April 2014. Swannie was born in Stanley, WI on Nov. 15, 1928 to Harald and Swanhild (Rondestvedt) Hoidahl. Her mother died when she was four years old. She went to live with her Aunt Dagny and Uncle Gene Craddock and cousins Jeannette and Dorothy in St. Louis and Kirkwood, MO. She lived with them until college but was able to spend summers with her father, grandparents, and cousin Phyllis in Stanley. She attended Kirkwood High School and, following family tradition, enrolled in St. Olaf College in Northfield, MN. She was proud of being an Ole. She graduated in 1950 with a double degree in Sociology and Psychology and was employed as a social worker in St. Louis. After graduation she traveled by ship to tour Europe. It was on this ship that she met her future husband, Ted Carlson. They married in September 1951 and moved to North Bend and then Corvallis where Ted worked at OSU. Together they raised three children: Ted Jr., Judy, and Eric. Swannie was active at Grace Lutheran Church and OSU Folk Club. She was a long-time volunteer at the Thrift Shop and Good Samaritan Hospital. She enjoyed playing bridge and attending many high school and OSU sports events. She and Ted traveled extensively on tours and cruises. Her trips to Norway to visit relatives were a highlight; she was extremely proud of her Norwegian heritage. Swannie took great interest in people, especially her children and grandchildren and their activities. She was close to her cousins and loved her friends. Swannie is survived by her husband Ted and her three children: Ted Jr. (Wendy), Judy (Duane) and Eric (Kari) as well as her eight grandchildren: Annette, Britt, Andrew, Siri, Neil, Camille, Evan and Paige. A memorial service will be held at Grace Lutheran Church on Jan. 29 at 2 p.m.. Memorial donations in her name can be made to Grace Lutheran Church, 435 NW 21st St, Corvallis,OR 97330 or St. Olaf College http://wp.stolaf.edu/giving/memorial-and-honorary-gifts/ Please leave your thoughts and memories at http://www.demossdurdan.com/

Swanhild Annette Hoidahl Carlson Swannie Carlson, 87, passed away peacefully in her sleep in the early morning of Jan. 17, 2016. She had suffered a stroke in April 2014. Swannie was born in Stanley, WI on Nov. 15, 1928 to Harald and Swanhild... View Obituary & Service Information

The family of Swanhild A. Carlson created this Life Tributes page to make it easy to share your memories.