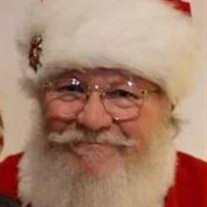 Ted G. Rusk Ted Rusk (aka Santa Ted) finished his earthly journey November 3, 2020. He stepped over into heaven to be greeted by a host of friends and family already there. Those celebrating Ted’s legacy are: his wife of 30 years, Keitha; sons, Mathew and Jeffrey Rusk of Cheyenne, WY; stepson, John Oliver of Trail, OR; siblings, Rodney Rusk of Cheyenne, WY; Gary Rusk of Edgewater, FL; Paul Rusk (Susan) of Payette, ID; Gregg Rusk (Alex) of Avondale, AZ; and Elaine Beecher (Gregg) of Aztec, NM. He has many grandchildren, great grandchildren, nieces, nephews and cousins. Ted was born May 20, 1948 in Ft Collins, CO to Alvin and Marie Rusk. When Ted was 5, the family moved to Cheyenne, WY. He was a 1966 graduate of Cheyenne East High School. Ted never knew a stranger, and everyone was his friend. He was a born salesman and could sell you anything (even if you didn’t need it). His employment started out at Safeway when he was a teenager. Other places he worked were Rocky Mountain Snacks, Wynn’s Automotive and Newport Fastenal, which he retired from in 2014. Ted’s relationship and love for Jesus Christ was the core driving force of his life. He loved praise and worship and sang on a worship team at his home church, the Waldport Foursquare Church in Waldport, OR. He also loved motorcycles and found a way to combine these two passions when he became a member of the Christian Motorcyclist’s Association in 1987. CMA’s vision is changing the world, one heart at a time through evangelistic outreach to the motorcycling community. Ted took his part in this ministry very seriously, going with his wife, Keitha, on two mission trips to Central America to present motorcycles to pastors there, giving them a much needed means of transportation. He also attended the Sturgis Motorcycle Rally every year for 18 years, involved with their street ministry. He did not miss an opportunity to pray with and share Jesus with his biker brothers. He completed one of the things he had on his bucket list when he rode his motorcycle in the 36th Annual 3 Flags Classic (the Iron Butt Classic) in 2011 with his son, Jeff, his brother, Gary and good friend of his, Mark Kemper. They road 2227.2 miles together from San Ysidro, CA to Penticton BC, Canada. One of his favorite sayings was “We don’t stop riding because we get old, we get old because we stop riding”. Ted was a fan of old cars. He had many stacks of old car magazines and attended as many car shows as he could. He liked watching NASCAR races, especially after the company he was working for, Fastenal, sponsored Carl Edwards for 17 NASCAR Sprint Cup Series Races in 2012. His favorite NFL football team was the Denver Broncos and he liked to wear his Bronco hat and shirt to church just to get a rise out of the Seattle Seahawk fans who attended there. He also enjoyed fishing. He used to say, “There’s nothing like reeling in a salmon!” After retirement, Ted wanted to do something to bring joy to people’s lives and so he went to the International University of Santa Claus in Seattle, WA to become a professional Santa Claus. He was proud to be a long standing member of the International Brotherhood of Real Bearded Santas, Santa’s PAC, and the Santa Claus Conservatory. Some of his Santa appearances include the Hood River RR “Polar Express”, the Springfield Creamery, Johnson Brothers Nursery in Eugene and Christmas Storybook Land in Albany. He held many a child on his knee and heard their Christmas list, ate lots of cookies and milk, and received many carrots for the reindeer. Ted was a gentle, kind and loving husband, father, grandfather, brother, uncle and friend who was loved by all who knew him. He is greatly missed! In lieu of flowers, donations in Ted’s honor may be given to the Mario Pastega House in Corvallis, OR, or Christmas Storybook Land in Albany, OR. A Celebration of Life is scheduled for Saturday, June 26, 2021 at Newport Foursquare church, 215 NW 15th St, Newport, OR 97365. Please RSVP to Keitha 541-487-4787

Ted G. Rusk Ted Rusk (aka Santa Ted) finished his earthly journey November 3, 2020. He stepped over into heaven to be greeted by a host of friends and family already there. Those celebrating Ted&#8217;s legacy are: his wife of 30 years, Keitha;... View Obituary & Service Information

The family of Ted Gordon Rusk created this Life Tributes page to make it easy to share your memories.