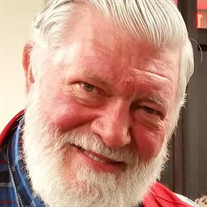 Terry A. Bang, age 75, of Corvallis, OR, formerly of St. Paul, MN passed through the gates of heaven on Tuesday, December 18, 2018. He died suddenly of a dissecting aortic aneurysm. Terry was a joyous, faith-filled gentleman who took the time to know his neighbors. He was finishing up his tenth year of driving for Meals on Wheels, played guitar and sang for St. Mary’s 9:00 am Choir, and was director of their Resurrection Choir. He founded the St. Peter’s Men’s Group and then did the same at St. Andrew’s Church in St. Paul, Minnesota. He played tuba in the Corvallis New Horizon Band, and bowled on several leagues for many years. He played and toured with the St. Paul Scouts Marching Band in his early twenties, and for 20 years sang and played rhythm guitar for his band, Sundown. Terry and Barb logged many hours on their Gold Wing, which he traded for his dream car, a blue Corvette, when they moved to Oregon. You could always find him with his beloved doggies who accompanied him everywhere, first, Miss Kitty and then her successor, Benji. He believed there was no other color than blue, insisting “Terry Bang Blue” was an actual color. Terry, our Santa, was the beloved husband of Barbara, and proud father to Mike, Scott, and Christina Bang, Joey (David) Kimdon and Katie Kimball, and a fun Grampy to Aria and Arbor Kimdon, Paloma Bang, and Barlow Kimball. He was the favorite (and only brother) to sisters, Jo Bang, Carli (Bill) Richard, Sue (Terry) Coady, and Marie (Paul) Schweizer, and a special person to first wife, Shirley Melaas, nieces, nephews, relatives and friends. Family and friends are invited to his wake with visitation, on Wednesday, December 26 drop in times from 5-7 pm at DeMoss-Durdan Funeral Home 815 NW Buchanan Avenue, Corvallis; Funeral Mass at 11:00 am, Thursday, December 27 at St. Mary's Catholic Church,501 NW 25th Street, Corvallis. and burial on Friday at 11:00 a.m.at Crystal Lake Cemetery, Corvallis. Plans for a Memorial Service in Minnesota are as follows: Celebration of Life Friday, 7:00 pm, Jan. 11, 2018 Twin Cities Trapeze Center, 719 E Minnehaha Ave St Paul. Feel free to bring your guitars, etc, and wear blue to honor our "Terry Bang Blue". Please share your thoughts and memories for the family at www.demossdurdan.com

Terry A. Bang, age 75, of Corvallis, OR, formerly of St. Paul, MN passed through the gates of heaven on Tuesday, December 18, 2018. He died suddenly of a dissecting aortic aneurysm. Terry was a joyous, faith-filled gentleman who took the time... View Obituary & Service Information

The family of Terry A Bang created this Life Tributes page to make it easy to share your memories.