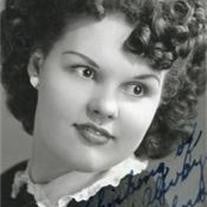 Thelma I. Neal, 89, of Albany passed away Saturday evening at her home with her son, Wade, at her side. She celebrated her 89th birthday last Thursday with family and friends. Her husband, John, preceded her in death on Feb. 3, 2006. Her greatest wish was to join him in their eternal life. Besides her husband, she was also preceded in death by her brothers, Sherman and Duane. Surviving Thelma are son Wade; daughter and son-in-law Jan and Ron Miller; sisters Sheri Mace, Inga Allen and Larene Kudlock; and sisters-in-law Elsie and Annie Svenson, and Phyllis Hoffman. Thelma was born and raised in Chicago, spending summers with her grandparents, aunts and uncles in South Dakota. She lived in Chicago as a young woman attending the Art Institute of Chicago. She loved drawing and oil paints. She worked as a secretary at Sears, which she reminded her family was one the tallest building in Chicago. She traveled west to Oregon in 1943, spending the summer on her father’s dairy in Lebanon with her brothers and sisters. She lived in Seattle for a time, working as a secretary in the shipyards. She later returned to Oregon, living in Bend with her brother, Sherman and sister Inga. She met John Neal, a friend of her brother’s, who she married in 1954. John and Thelma, with her two brothers, owned and operated sewing machine and fabric stores in Albany and Lebanon in the 1950s. She taught sewing classes at the store and later to her daughter and her friends. Over the years she belonged to bowling leagues and TOPS. She provided local business custom embroidery. She continued painting, especially flowers, old barns and scenic landscapes. She helped John with his annual garden spending weeks each year canning, freezing and pickling the bounty of John’s green thumb. She will be missed by all who loved her. A memorial service will be at 10 a.m. Thursday, May 17, at DeMoss-Durdan Funeral Home in Corvallis.

Thelma I. Neal, 89, of Albany passed away Saturday evening at her home with her son, Wade, at her side. She celebrated her 89th birthday last Thursday with family and friends. Her husband, John, preceded her in death on Feb. 3, 2006. Her... View Obituary & Service Information

The family of Thelma Neal created this Life Tributes page to make it easy to share your memories.

Thelma I. Neal, 89, of Albany passed away Saturday evening at...