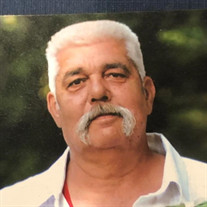 Theodore " Ted" John Baldwin, age 65, passed away with family at his side on March 11, 2020 in Corvallis, OR. Ted was born March 13, 1954 in Newport, OR to Lawrence and Ada Baldwin. He spent the majority of his school years in Kansas City, KS and his high school years at Eddyville School. He graduated in 1973. Ted married Diana Kapfer in 1981 and they had two children, Sara Ruth and Zackary John. Ted and Diana later divorced. Ted began his working career in the woods, was a Custodian at Toledo High School, drove long-haul tractor trailer for Gordon Trucking, and retired from driving chip truck for Segerson Trucking in 2017. Ted had a heart as big as he was, but sadly was plagued with heart disease, which ultimately took his life. Ted was a simple man, loved his family and was happy living a quiet life in Elk City, spending time with family and close friends. He was known for his quick smile and big hugs. Ted and son Zackary remained extremely close, and he loved the visits with Zack, Madilyn and Conner. He was very proud of Zackary, the man and father he's grown to be, raising his children on his own. Sara and her family live in Louisianna, so visits with his daughter and grandchildren were rare, but treasured. Ted was preceded in death by his parents Ada and Lawrence and brother Andy. He is survived by his children Sara & Zackary, brother Mike (Juanita) Baldwin, sister-in-law Julie Baldwin, and five grandchildren. Nephews Chris, Bruce, Eric, Curtis and Bret Baldwin, as well as many friends. In light of the current health crisis and wanting to keep everyone safe and healthy, the Celebration of Ted's Life will be held at a later date. You may visit www.demossdurdan.com to leave messages for the family.

Theodore " Ted" John Baldwin, age 65, passed away with family at his side on March 11, 2020 in Corvallis, OR. Ted was born March 13, 1954 in Newport, OR to Lawrence and Ada Baldwin. He spent the majority of his school years in Kansas City,... View Obituary & Service Information

The family of Theodore John Baldwin created this Life Tributes page to make it easy to share your memories.