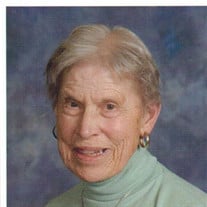 Theresa Grismer March 16, 1926- Sept. 11, 2015 Theresa (Terry) Agnes Grismer (Beard) was born on March 16, 1926 to Henry Milton and Stella Mary Beard in Baker City, Oregon. Aggie, as her family called her, was the youngest of 9 children. She attended St. Francis Academy in Baker City, receiving her high school diploma in 1944. She attended St. Vincent Hospital School of Nursing in Portland, graduating in 1947. She obtained a nursing position at what is now the Oregon Health and Science University “on the hill” where she met Jerome (Jerry) Grismer, a cardiac surgeon. They were married in 1954, and she became a full time mother to his children, Janet and Eric, from his recently deceased wife, Kathleen (Katie) McCloskey. Two additional children, Michael and Mary, were born in Portland in the next few years. The family moved to Minneapolis, Minnesota, where Mark, Michelle, and Matthew were born. Many happy summers were spent at the family cabin on Crooked Lake near Siren, Wisconsin. After twenty-five years of marriage, much to Terry’s sadness, Jerry divorced her. She returned to her roots in Oregon with her youngest son Matthew, moving to Corvallis in 1979. After updating her nursing degree at Willamette College, she volunteered with Hospice for many years and retrained herself to be the office administrator for a small business, Environmental Marketing Associates. She attended and was active in St. Mary's Catholic Church and the People of Praise Christian community, where she developed many lasting and special friendships. Terry greatly enjoyed traveling with family or friends, playing bridge, solving crosswords, having lunch with friends, reading a good book and baking cookies to share. Her children remember her for her loving, caring, neat and thrifty ways; and for the constancy of her faith, in good times and bad. Whether through cleaning cupboards, packing our clothes in paper bags for a trip, or sharing the many grand and great grandchildren with Terry, she left an indelible, beautiful and lasting mark on all of her children. She will be greatly missed and happily remembered by all her family and friends. She was preceded in death by her parents, and all of her siblings, William, Francis, Emily, Mary, Raymond, John, Martha, and Thomas. She is survived by her 7 children, 24 grandchildren, and 5 great grandchildren. Family and friends are invited to a Memorial Service, 11:00 am, Tuesday, Sept. 15, 2015 at St. Mary’s Catholic Church, 501 NW 25th St, Corvallis, interment at St. Mary’s Cemetery. Please share your thoughts and memories for the family at www.demossdurdan.com.

Theresa Grismer March 16, 1926- Sept. 11, 2015 Theresa (Terry) Agnes Grismer (Beard) was born on March 16, 1926 to Henry Milton and Stella Mary Beard in Baker City, Oregon. Aggie, as her family called her, was the youngest of 9 children. She... View Obituary & Service Information

The family of Theresa "Terry" Grismer created this Life Tributes page to make it easy to share your memories.