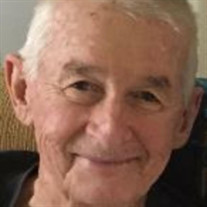 Thomas M. Halpin, Sr., 89, of Corvallis, OR, formerly of Ventnor City, NJ passed away peacefully with family by his side and in his heart, on Wednesday, April 13. Tom is predeceased by his brothers Billy, Jack, and Michael, and is survived by his wife of 62 years, Constance (nee Meehan), his children Tom (Connie), Mary Kate (Nick), Theresa, Connie, Jack (Lexie), Anne (Erik), his sister Catherine of Roxborough, PA, his brother, Joe of Lancaster, PA, and a host of nieces and nephews, grandchildren and great-grandchildren. Known as Tom, Tommy, Pops, Papa La, or Dad, he was born to Mary and Thomas S. Halpin on December 2, 1932, in Philadelphia, PA. Early in his life, Tom was involved with the Big Brothers organization and served as a counselor at Camp Wyomissing in the Pocono Mountains. He attended South Catholic High School in Phila, PA, and graduated from the University of Pennsylvania in 1957 after serving stateside in the US Army during the Korean War. He and Connie married in 1960 and built their life in Ventnor, NJ, where their home was always open, and they likely entertained angels unawares. Tom cultivated a rich spiritual life. For years, he dedicated part of every day to quiet meditation. A long-time parishioner of St. James Church in Ventnor, NJ, he served as an usher and as a member of the Parish Council and choir. He was also a member of the Men of Malvern and Knights of Columbus. As an officer in Serra International, he worked to support religious vocations for young men and women. After moving to Oregon, Tom joined the congregation at St. Mary’s Church in Corvallis. He was active in Centering Prayer and the local Knights of Columbus and volunteered in the Food Pantry. Tom enjoyed a distinguished career as a Physical Therapist and was a passionate advocate for his patients and his profession. He served as director of Physical Therapy at both Atlantic City Medical Center and Atlantic County Health Department, and owned a private practice, Ventnor Physical Therapy. Tom was proud to receive the Most Distinguished PT award from the American Physical Therapy Association (APTA), NJ Chapter in 1977, and served on multiple committees for the NJ APTA. Tom was a waterman of the highest degree. He grew up in the city, but from a young age he found water. He was a champion swimmer, setting records with the City of Philadelphia, US Army, University of Pennsylvania, and later in Masters’ Swim meets, where he competed into his 70s. He relished swimming in open water of any kind and could often be seen swimming out beyond the breakers. He was a surfer and a body surfer and passed on his love of the ocean to his children. He was an avid boatman. In his canoe or at the tiller of his sailboat Cookie, he loved exploring and fishing the back bays of South Jersey and the lakes, streams, and rivers of the eastern states and the Florida Keys. Tom was an outdoorsman and lover of nature and embraced any opportunity to learn and explore. Whether solo, with family, or with friends, he relished camping, hiking, skiing, and birding. Tom and Connie took their children on epic road trips all over the country, instilling in them a sense of curiosity and lifelong love of travel. Family and friends will remember many a raucous and joyous Celtic festival where the more was always the merrier. He loved to garden and was known for his green thumb and was always on the lookout for things to grow and places to grow them. Tom had an impish grin and a silly side; he was always up for some mischief and never missed a chance to make a groan-worthy pun. As a storyteller he’d have made his Irish ancestors proud. Tom was a voracious reader and devoured the written word in any form and on almost any topic. He saw the world with an artist’s eye and couldn't seem to help but create. He had a distinctive eye for composition, whether sketching, sculpting, or working with random found objects. He loved music and would often regale anyone within earshot with his talent on concertina, tin whistle, and thumbs. Tom was never boastful; he lived a life of purpose and quiet dedication to service, empathy, and faith. He embraced all of life’s adventures and challenges and inspired all who have known him. His was a life well lived. Tom is missed. A memorial service was held on April 20, at St. Mary’s Catholic Church, Corvallis, OR. The family asks that in lieu of sending flowers, people make donations in support of the Lymphoma and Leukemia Society or Serra International. His family is planning a larger celebration of his life, befitting Tom’s incredible contributions and love for his family, on September 10, 2022 at St. James Church in Ventnor, New Jersey. “Those we love don’t go away. They walk beside us every day, unseen, unheard, but always near. Still loved, still missed, and very dear.” Alex MacLean, author

Thomas M. Halpin, Sr., 89, of Corvallis, OR, formerly of Ventnor City, NJ passed away peacefully with family by his side and in his heart, on Wednesday, April 13. Tom is predeceased by his brothers Billy, Jack, and Michael, and is survived by... View Obituary & Service Information

The family of Thomas Michael Halpin created this Life Tributes page to make it easy to share your memories.