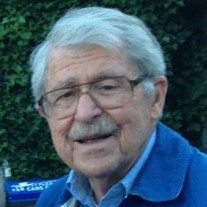 Oct. 6, 1923 — Feb. 4, 2016 Thomas Coshow McClintock, professor emeritus of history at Oregon State University, died at home in Corvallis on Feb. 4, 2016, of complications following a stroke. He was 92. Tom was a loving husband, father, and grandfather; a meticulous scholar and revered teacher of American history; a lover of music (opera in particular); an avid gardener; and an engaged community leader. Tom was born in Lebanon, on Oct. 6, 1923 to John and Leone Coshow McClintock. He had an older brother, Leighton (always known as Mac), and two sisters who died in childhood. Tom was a fourth generation Oregonian, two of his maternal great-grandparents having come west on the Oregon Trail in 1847 and 1851 and his great-grandfather having founded the Thomas Kay Woolen Mill in Salem. The family lived in various cities in the Pacific Northwest as his father was transferred every few years as part of his job with Standard Oil. Tom graduated from Beaverton High School in 1942, and started his college education at Oregon State. World War II intervened, however, and by 1943 Tom was with the Army’s 11th Armored Division in Europe. He was wounded in the Battle of the Bulge, losing an eye to German shrapnel. Tom returned to Oregon State after the war, but later transferred to Stanford, receiving his BA in 1949. He spent a year at Columbia University, receiving an MA in history (1950), moved on to the University of California at Berkeley, and completed his PhD at the University of Washington (1959). Tom joined the history department at OSU in 1959 and was a fixture there for 30 years. He served many years as department chair, where he earned the respect of his colleagues for his open-minded approach and his commitment to academic freedom. He also was associate dean of the College of Liberal Arts (1985-89). He particularly loved teaching the history of the westward expansion and the “Great Americans” course — a survey of American history through biographies — that he took over from his friend Tom Meehan. During graduate school at UW, Tom met Patty Kennelly of Hillsboro, Oregon, who had spent two years at OSU before transferring to UW to work on a teaching degree. They married in 1954 and the family soon grew to include Mary Louise (b. 1956), Megan (b. 1958; died 2000), and Anne (b. 1960). Corvallis was home for Tom and Patty’s family, but they were also able to spend a year in Britain (1970-71) while Tom was a visiting professor at both the University of Manchester and the University of Stirling. Tom and Patty came to love Britain, and London in particular, and Tom spent several productive and happy semesters as an honorary research fellow at the University of London. Tom was a quiet, competent, inclusive leader of dozens of committees, commissions, task forces and work groups at OSU, in state and local government, and with various community groups. To name but a few, he served for more than 20 years on the Oregon Geographic Names Board and was a member of the Oregon Board of Education, the Corvallis-OSU Symphony Board, and the OSU Faculty Senate. Tom was particularly proud of his long service, including as chair, of the Corvallis School Board; his work as a board member of the Benton County Historical Society; and his decades of service as board member and chair of the Corvallis-Benton County Public Library, including leading the effort to fund and construct a major addition, completed in 1992, to the historic Belluschi building. Tom’s love of the library was demonstrated in his thoughtful 2008 book, The Best Gift: A History of Corvallis-Benton County Public Library. Consistent with his careful scholarship and his desire to put slices of history in context, the book begins with the invention of writing around 3500 BC and does not mention libraries in Corvallis or Benton County until chapter 4! Tom and Patty defined community service and involvement. They were stalwarts of First United Methodist Church, and Tom sang bass in the choir for decades. Even in his 90s, he could be seen planting flowers in front of the church in the spring. Tom and Patty opened their home to many foreign students studying at OSU and funded scholarships in music and history. They developed close friendships through their church, bridge group, a “gourmet” dinner club, croquet tournaments, and open houses. No summary of Tom’s life would be complete without mentioning politics — and his letters to the editor. Although an even-handed teacher, Tom was a life-long liberal Democrat who regularly fired off pointed, well-crafted letters to the editors of the Gazette-Times and the Oregonian, many of which were printed. Even as his memory faded some in his last year, he made clear where he stood on Obamacare, John Boehner, and Justice Clarence Thomas. Tom was proud of his wonderful daughters and grandchildren. Tom and Patty’s daughter Megan died of colon cancer in 2000, a shocking blow to the family, but softened by their strong relationship with Megan’s partner, Julie Shapiro, their children, Eli and Leah, and Julie’s wife Shelly Cohen. Tom’s close-knit family also includes Mary Louise and her husband, Tom Balmer, and their children, Rebecca and Paul; and daughter Anne, her husband, Vincent Corbière, and their children, Thomas and Julien. The grandchildren have fond memories of their grandfather’s limited, but enticing, cooking repertoire (meatloaf, chocolate chip cookies, chocolate-peanut butter balls and cranberry sherbet); his devotion to the Saturday morning broadcast of the Metropolitan Opera; his croquet and card skills; and his fondness and talent for arts and crafts projects. In lieu of flowers, please consider a gift to the Corvallis-Benton County Public Library Foundation or the Thomas and Patty McClintock Symphony Scholarship Fund at the OSU Foundation. A memorial service will be held on Saturday, March 12, at 4 p.m. at First United Methodist Church in Corvallis.

The family of Thomas C. McClintock created this Life Tributes page to make it easy to share your memories.