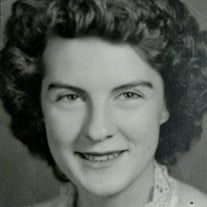 Velda McCabe Mangan October 29, 1932 to September 6, 2020 Velda Bernice McCabe Mangan passed away peacefully of lung cancer on September 6, 2020 in Corvallis, Oregon. Velda was born in Hotchkiss, Colorado on October 29, 1932 where she spent her childhood summers on a sheep ranch on The Muddy in the Ragged Mountains. Her first jobs were working at the local movie theatre and peach orchards. Velda and James (Jim) Mangan went to school together, graduating in the class of 1950, and married in 1951. Velda went on to earn her associate’s degree in office administration from Garden City Community College in Kansas while working as a bookkeeper at a refinery and raising their first child and losing a second child in infancy. The family then moved to Missoula, Montana where Jim attended forestry school and Velda worked for First National Bank. After graduation, the U.S. Forest Service relocated them to many places; Sheridan WY, Greybull WY, Custer SD, Rapid City SD, Fort Collins CO, and Glenwood Springs CO. They had three more children during this time. In addition to raising her family, Velda operated room size computers in the 1960s. She became a realtor, a bookkeeper for an orthodontist and the Methodist Church, and survived thyroid cancer. Velda also edited and type set the book Elmer Bair’s Story. After their retirement, Velda and Jim returned to Hotchkiss, Colorado. There they enjoyed their mountain flower garden and card games with family and friends for many years. In 2002, Velda was diagnosed with lung cancer. After completing a lung surgery, Velda had one of the great highlights of her life; a long trip to Ireland and Scotland where she kissed the Blarney Stone and got blissfully lost. After Jim passed in 2007, Velda moved to Tucson, Arizona, and lived with her daughter Coleen and husband. There, she received many more lung cancer treatments. Velda participated in test trials at Mayo Clinic and was one of the first 50 people in the US to receive the groundbreaking gamma knife radiation on the lung. Her health improved, and Velda relocated to Newberg, Oregon in 2014. She met and fell in love with Darrell Zook and they treasured their time together. Velda is survived by four children: Maureen Chaffin (Steve), Louis Mangan (Robin), Coleen Keedah (Randy), and J. Sean Mangan (Rhonda), 12 grandchildren, and 9 great-grandchildren. Her parents H. Buster and Dorothy McCabe, husband Jim, and son Dennis preceded her in death. Velda will be greatly missed along with all of her Irish traditions and superstitions. She was shy yet strong, a horseback rider, a seamstress, an artist, a worrier, genealogist, keeper of family heirlooms, and a caretaker. Velda taught her sons how to really throw a ball. She won most card games, enjoyed campfire hotdogs, nature, strawberry milkshakes, made the best pies, and ate chocolate daily. Velda was a loving and gracious lady with a gentle, thoughtful soul who was never profane or disrespectful. She never let the many hardships and trials turn her from kindness. Known for her strong belief in prayer, she would privately help those shunned and ignored with a leg up. Velda was a brilliant guiding light to all who knew her. Her light has not gone out, it has now been handed down to the generations she influenced. Love you forever and a day. Due to Covid-19, there will not be any services. We are planning a Celebration of Life for Velda around Memorial weekend in Hotchkiss, CO. Please share your thoughts and memories for the family at www.demossdurdan.com

The family of Velda McCabe Mangan created this Life Tributes page to make it easy to share your memories.