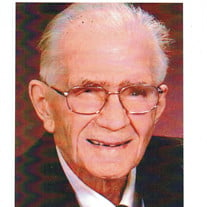 Venceslaus Edward Kasparek “Ed (“Buck”) Ed died at Samaritan Evergreen Hospice House in Albany on Dec. 31, 2015. Ed was born June 30, 1922 on a tenant farm to immigrants, Stephan (a widower), and Elizabeth (Volk) Kasparek, Bee Nebraska, the first of her nine children. At age 3, Ed was kicked by a horse near his left eye resulting in permanent major loss of vision in that eye. They had moved to a farm near Seward where he walked to the county school and first learned English. About age 8, he survived minus 4 degree blizzard by sheltering in a snow bank for several hours. He helped with grain harvests and animal care, and fished and hunted for extra food. He attended Seward Hugh School and worked for the NYA. He entered the army in 1942, serving in Nebraska, Kansas, and Missouri as an office worker and messenger, and received police training. In Louisiana he was trained in demolition engineering. Finally he guarded prisoners of war in Texas and Arizona, many doing farm labor. Meanwhile his family had moved tin 1945 to a farm near Independence, OR for one year and then to a farm on Gordon Road, Corvallis. He joined them after discharge in 1946, worked on nearby farms and on one in Lobster Valley. He worked one year for the railroad, repairing tracks between Corvallis and the Coast. In 1948 he joined the OSU Physical Plant, employed 35 years as an equipment operator helping with transport of materials, construction, installation maintenance and demolition on and off campus. Je was nicknamed “Buck” for his heavy lifting and carrying. After retirement in 1984, he continued to work part-time for several years as a grounds keeper. His family had moved to Kiger Island and later purchased the former Kiger Island Country School property. In 1950 they dismantled the buildings, saving materials and Ed helped his father and four younger brothers build their two story family home and out buildings, where he lived the rest of his life, with some of his family. He helped care for his garden and small orchard and also purchased additional farm land nearby, growing crops and fruit trees in his spare time for several years. He sold produce to Gerdings Market. Ed was a devout Catholic, praying nightly, attending church weekly, volunteering for adoration, joining the Knight of Columbus, and helping at their fundraisers. He also donated to his church and other Catholic charities, American Indian and Veterans Organizations, and enjoyed buying presents for his siblings and their children. He was a member of Post 10, American Legion and the Moose. In the 1970’s he met Frances Duryee. They enjoyed weekend dances, boating, fishing, hunting, gardening, church camps, trips to the coast and holiday visits to relatives. They married Sept. 19, 1992 and lived in the family home while she continued to commute to the Dept. of Biology, UO. Together they gardened and sold surplus produce on consignment at the Farmer’s Market, exhibited at county fairs and donated to Stone Soup. Ed especially enjoyed growing and eating long “burpless” cucumbers, and won many first prizes. , 2015 was the first year he did not have a vegetable garden. The last couple of years he had balance problems and increased COPD. Early this year he was hospitalized with cancer. It was untreated but he had no obvious severe symptoms until a lower gastric blockage occurred on Christmas night. Ed is preceded in death by his parents, his older half-brother, Raymond Kasparek and half-sister, Cecelia K. and his 4 younger brothers, Theophilis (Ted), Steven, Bernard, Alphons (Al), and younger sister, Patricia. He is survived by his wife, Frances L. Duryee; 3 younger sisters, Mrs. Marie (Mary) Dowless, Mrs. Martha Billings and Mrs. Angela Tietz; 13 nieces and nephews. A Memorial Service will be held 1:00 pm, Saturday, January 16, 2016 at St. Mary’s catholic Church, 501 NW 25th Street, Corvallis, followed by a reception. In lieu of flowers, donations can be made to St. Mary’s Catholic Church, or Camp Magruder; Rockaway; American Cancer Society facilities maintenance c/o OSU foundation or other charity. Please share your thought and memories at www.demossdurdan.com.

The family of Venceslaus "Ed" Kasparek created this Life Tributes page to make it easy to share your memories.