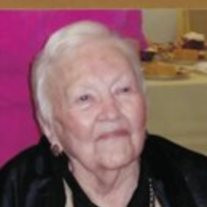 Vera M. Clark Dec. 8, 1917- Feb. 7, 2014 On Friday, February 7, 2014, Vera Marion Anderson Clark went peacefully to be with her Lord. She is survived by her husband of 70 years, Glenn Clark, three children, Susan Ondiak (Wayne) of McLean, VA, Mike Clark (Wren) of Newport, OR, and Jane Fuller (Richard) of Vienna, Austria. She was preceded in death by their daughter Juliann Bartow of Newport, OR. Vera was the youngest of four children born to Estella and John A. Anderson on December 8, 1917 in Sauk Center, MN. Her parents were children of Swedish immigrants who endured the hardships of an ocean crossing. She was preceded in death by her two sisters, Ruth Lovegrove and Gladys Brandt, and her brother John A. Anderson, Jr. The family settled on a farm near Fairmont, NE where Vera spent most of her childhood. Her family prospered in the '20's and experienced the hardships of the depression and dust bowl of the '30's. Vera attended a rural school through 8th grade and graduated from Fairmont H. S. in 1935. She taught 1st through 8th grades in a one room rural school before attending Nebraska Wesleyan College where she received an elementary teaching certificate. In 1941 Vera accepted a teaching job in Hyannis, NE where she met her future husband, Glenn Clark, a recently hired music teacher. In December of 1941, Glenn enlisted in the service and began training in the Spring of 1942. After a long distance relationship, they were married on July 22, 1943 in Fairmont, NE. Their daughter, Juliann, was born in San Antonio, TX during Glenn's military service, and Susan, Mike, and Jane were born in Nebraska. In 1960 the family moved to Laramie, WY for further education and teaching positions. Vera taught 4th grade in a rural school and obtained a BA in Elementary Education at the University of Wyoming. In 1965, Vera, Glenn, Mike and Jane moved to Clark Air Force Base in the Philippines where Vera taught 4th grade and Glenn served as an administrator in Department of Defense Schools. In 1968 Glenn accepted a position at OSU moving the family to Corvallis. They joined the First Baptist Church where Vera faithfully served in various capacities. Vera taught music in the Kings Valley School, volunteered at OSU Folk Club, and continued active participation in PEO and many community events. Vera was a much loved and admired wife, loving mother of 4, grandmother of 9, great-grandmother of 8. She had a marvelous sense of humor and her encouraging, nurturing manner blessed many people. Vera was a gifted teacher, renowned cook and homemaker, a cowgirl, wonderful hostess, fine musician, and talented artist. Throughout her life she maintained her Christian faith that she shared with family and others. From her 96 years, Vera was able to share accounts of her Swedish heritage, farm life, overseas travels, professional life as elementary teacher and musician and her wartime experiences. A memorial service will be held in Vera's honor on Friday, February 14 at 2:00 pm at the First Baptist Church at 9th and Monroe in Corvallis. Donations may be made to Benton Hospice (www.bentonhospice.org).

The family of Vera Marion Clark created this Life Tributes page to make it easy to share your memories.