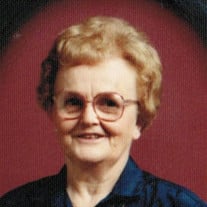 June 4, 1921 — May 22, 2014 Viola Mildred Beck of Corvallis went to be with her Lord Jesus Christ on Thursday, May 22, 2014, at her P.S. We Love Seniors residence, with her family at her bedside. She was 92 years old. Viola was born June 4, 1921, to Marie and Henry Flomer in Linn, Kansas. She lived there on the family farm with two sisters and a brother, graduating from high school in 1939 as valedictorian of her class. When her older sister, LaVera, died of leukemia, the family migrated west, living in Colorado before settling in Albany, where they opened a restaurant. During this time as a waitress, Viola met Charles Beck, whom she married April 23, 1944. Their first son, Bill, was stillborn, but they had three more sons, Jim, Bob and Gary. When Charlie’s health declined, Vi purchased Gloria’s Beauty Salon in 1966. She spent 40 happy years running the business, retiring in 2005. She always valued the many friends she made through Gloria’s. Charlie died in 1970; Vi immersed herself in the sports her boys and their friends enjoyed. Always a huge baseball fan, she remembered Johnny Mize of the St. Louis Cardinals as her first hero. She was even thrilled when her three sons once brought her a new basketball on her birthday, and she was pleased to let them borrow it. “What’s mine is thine” was one of her most popular sayings. Vi became the matriarch of her backyard whiffleball league, leaving work at noon every Saturday to prepare hot dogs, lemonade and chocolate chip cookies for the players. That backyard produced seven professional baseball players, including three major-leaguers. Several others went on to careers as coaches and scouts. Even the head football coach at Oregon State University used to hit foul balls into the maple tree in right field. When Vi’s youngest son, Gary, became the football coach at Corvallis High School, Vi attended every Spartan game, home and away, for 23 years. The only time she ever was heard to swear was after a one-point loss in 1985 in Bend. In her later years, Vi always fondly remembered the summer trips to Seattle to watch one of her favorite “sons,” Harold Reynolds, play second base for the Mariners. But she was equally proud of all her “sons” who played ball in her yard, and opened her refrigerator even to the “sons” who went on to play for the Oregon Ducks. We never could convince Vi not to root for the Ducks when they weren’t playing the Beavers. She always said she rooted for the team from her home state. She was stubborn. Vi was preceded in death by her sister, LaVera; and brother, Loren. She is survived by her sister, Lorena of Sun City, Arizona; her three sons, Jim (wife Dolly), Bob (wife Deb) and Gary (wife Vicki), all of Corvallis; 10 grandchildren; and two great-grandchildren. The family would like to thank P.S. We Love Seniors for the wonderful care Vi received during the last five years of her life. Remembrances in her name can be made to Zion Lutheran School. Her Christian faith always was the center of her life, and as she often said, “Time goes on ... for now.” Friends and family are invited to a memorial service at 11 a.m. Saturday, May 31, at Zion Lutheran Church, 2745 N.W. Harrison Blvd., Corvallis. Vi would not want to conflict with the Beaver baseball team in the regionals. A private graveside service took place Tuesday. Please share your thoughts and memories for the family at www.demossdurdan.com.

The family of Viola Mildred Beck created this Life Tributes page to make it easy to share your memories.