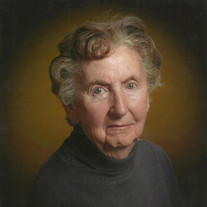 Virginia Mae Hoffman was born on August 5th, 1916 in Indianapolis Indiana to John Ira and Olive (Weaver) Hoffman. Her parents were both teachers - her mother taught grade school and her father taught high school. When her father got his law “certification” and started practicing law her mother settled in to being a housewife. According to Virginia, her beloved mother died when she was 15, and her father sent her away to live with cousins in California. She had an uncle who was a pilot, who inspired her to want to fly. He delivered “airmail” and his plane was started by pulling the propeller. When the famous pilot, Jackie Cochran, asked for women volunteers for WW II, Virginia joined her group and received the training to become a WASP (Women Airforce Service Pilots). She said they flew everything the military had, but because of the prejudice in the military at the time, women were restricted to flying within the borders of the U.S. as “ferry pilots”. WASPS were not considered to be military and there were no benefits until the 1970s when they were finally declared part of the military. Virginia obtained her BA in Home Economics from Indiana University in 1946. She wanted to be a geologist but was directed into Nutrition Sciences because “there was no place for women to be geologists”. She married Robert J Coker on April 6, 1947 in Burbank, CA. Her best friend from WASP service, Liz Watson, was her Maid of Honor. Bob took Virginia to live in Alamogordo, NM, where he worked as an engineer in the missile industry. She began to work for County Extension and enjoyed meeting farming families (who resented the missile industry.) She loved the desert there and has always called herself a Desert Rat. She was a “rock hound” and made trips to Mexico to hunt for special rocks. She eventually divorced Bob because he was “married to his job”. Virginia married Charles C. Dean on October 10, 1959 in the Central Military Chapel, Ft Bliss, Texas. Charles was a Captain in the Army, an equestrian, and the love of her life. They moved to Santa Barbara, CA where Virginia worked as a Dietician for the Santa Barbara Medical Clinic. Charles and Virginia made their way back to New Mexico and he died January 3, 1966. She started traveling - usually solo - to many places in the world. These trips included sea journeys on freighters that took on passengers. She saw much of Asia and South America that way. She later traveled to Australia and New Zealand, and though New Zealand was her favorite country, she ended up meeting an Aussie man, developing a relationship and staying with him for a year, till she convinced him to come to the U.S. with her. This is when she began to live in Oregon. They eventually parted because she didn’t want to live in Australia, and he didn’t want to live in the U.S. Virginia’s time in Corvallis included volunteering at the hospital, and Crossroads Conversation Partners Program, developing friendships with several international students. She participated in the Retired Officers Club, Good Samaritan Episcopal Church and Oakville Presbyterian Church. Virginia dearly loved all animals, but especially dogs. She loved nature, and she loved visiting the ocean. She also loved the Southwest and desired to return there. By her 100s, having outlived family and many of her old friends, she experienced some loneliness. But those who became her new friends were dedicated to her, loving her stories and her company. She had a wonderful, dry, straight-faced, eye-twinkling style of humor. Virginia’s life was rich and fully lived! A Memorial Service will be held on Tuesday, September 29th at 2:00 pm at Oakville Presbyterian Church 29970 Church Dr. Shedd, OR.

Virginia Mae Hoffman was born on August 5th, 1916 in Indianapolis Indiana to John Ira and Olive (Weaver) Hoffman. Her parents were both teachers - her mother taught grade school and her father taught high school. When her father got his law... View Obituary & Service Information

The family of Virginia Coker Dean created this Life Tributes page to make it easy to share your memories.

Virginia Mae Hoffman was born on August 5th, 1916 in Indianapolis...