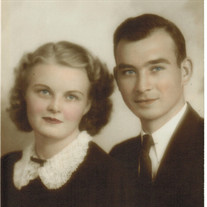 Virginia Jane Langland (Knowles) Dec. 25, 1919 — Nov. 30, 2014 Robert Gordon Langland April11, 1917-April 28, 2015 Robert was born to Joseph and Mary (Drolema) Langeland in Grand Rapids, Michigan, where he hunted and fished with his parents and brother Jack; swam and boated on Maston Lake during the summers; completed high school and jointed the Navy. Virginia was born in New Jersey to Thomas and Edith (Kincaid) Knowles. The family moved west when she was young to Colorado for a few years, eventually settling in San Diego, California, with her sister and two brothers. She completed high school with accomplished secretarial skills. Robert “Bob” met Virginia “Ginger” at a dance before World War II, when his naval ship was in port in San Diego, California. She was still in high school and he was a seaman. They loved to dance, which led to an elopement in Arizona and a long and devoted marriage, five weeks short of 77 years. Together they raised five children, lived in over 10 locations throughout the country, including Hawaii, Washington, D.C., eastern and southern states and California. Bob’s 30-year naval career started aboard ship and then focused in naval aviation electronics. He gained ranks from seaman first class to full commander. Considering the educational opportunities for their three younger sons, they moved to Corvallis 49 years ago upon Bob’s retirement. He taught an electronics course at LBCC in Albany, joined Corvallis Art Guild, and continued his volunteering with the Boy Scouts by serving as Benton District Camp Coordinator. He was awarded a National Silver Beaver Award for 30 years of service to scouting. In earlier years Virginia also served in scouting as a Boy Scout Den Mother and a Brownie Girl Scout Leader. In Corvallis she joined the Corvallis Garden Club as a member and served a term as president. She gained landscaping credentials and became an active and respected National Garden Judge and a member of the Willamette Judges Council. When she was not in their home garden, she was an accomplished and avid seamstress and tailor. Bob was passionate about painting, fishing, model railroads and sailing, for which he moored a sailboat at Fern Ridge Lake. As an art guild member he regularly displayed his own paintings at various Corvallis venues. Virginia and Bob enjoyed square dancing for many years in Corvallis. Robert and Virginia are survived by sons Robert T. (Lynn), John R., David G. (Janet), Paul S. (Venetia) and daughter Janet M. Wagenschutz (Lloyd). They leave nine grandchildren, Chris and Jennifer (California), Sean (Oregon), Barry and Kathleen (Oregon), Scot and Phillip (Alabama), David (Pennsylvania) and James Wagenschutz (Colorado); and six grandchildren. Virginia is survived by brother Charles Richard Knowles of Gig Harbor, Washington. She was preceded in death by sister Juanita Jarvis and brother Walter Knowles. Robert is survived by nephew Jack Langland of Michigan. He was preceded in death by brother Jack. The family plans a memorial for Bob and Virginia at 2 p.m. Sunday, June 28, at the Unitarian Universalist Fellowship, 2945 N.W. Circle Blvd., Corvallis. Instead of flowers, family suggests donations in Bob and Virginia’s names are sent to Benton County Hospice, Willamette Judges Council or the Corvallis Art Guild.

The family of Virginia Langland created this Life Tributes page to make it easy to share your memories.