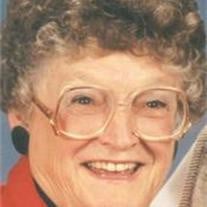 Vivian “Vi” Commons, 89, formerly of Grants Pass, peacefully passed away in Corvallis with family at her side. She was born in Kimball, S.D., to Mary and Otto Kempter as the eighth of nine children. She was the last survivor of her family. Vivian was a longtime resident of Grants Pass, having moved there with her family in 1962. She was married for 62 years to Stan Commons before he passed away in 2007. Together they owned and operated the Arctic Circle Drive-Ins in Grants Pass and later in Corvallis, where she did all of the bookkeeping for the businesses for over 40 years, until retiring. She was a member of St. Anne’s Catholic Church in Grants Pass volunteering for the Altar Society, as well as participating in other numerous activities in the church. She was active in the Oregon State Bowling Association, helping Stan run the Oregon Men’s State Bowling Tournament for over 25 years. She was a life-long Grants Pass Caveman and Oregon State Beaver fan and followed sports of all kinds. All three of her daughters were active in cheerleading and Vivian was the master seamstress, sewing many uniforms for her daughters and their cheer squads over the years. Vivian continued to attend OSU sporting events throughout her life as a very vocal fan. Vivian is survived by her children and their spouses, Chris Smith of Greenback, Tenn., Denise and Rick Johnson of Corvallis, and Tern and Tim Wicks of Reedsport. She is also survived by her beloved grandchildren, Spencer, Brynn, Cody, Kyle, Kjerstine and spouse Chris, Forrest, and Alex; as well as her great-grandchildren, Claudia and Frank. Vivian lived the last few years of her life trying to make others happy. She lived with others in an assisted living facility and spent her time entertaining those around her. She will be missed by both the residents and the special staff. A graveside service will be in November at the Veterans Cemetery in Eagle Point, where she will join Stan, a former World War II veteran. In lieu of flowers, the family requests donations be made to Benton Hospice Service or to the charity of their choice in her remembrance.

Vivian “Vi” Commons, 89, formerly of Grants Pass, peacefully passed away in Corvallis with family at her side. She was born in Kimball, S.D., to Mary and Otto Kempter as the eighth of nine children. She was the last survivor of her family.... View Obituary & Service Information

The family of Vivian Commons created this Life Tributes page to make it easy to share your memories.