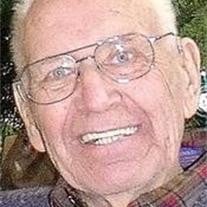 Walter Rudolph Eichler Jr., 77, of Corvallis died of cancer on Wednesday at his home. He was born in La Center, Wash., to Walter Rudolph Eichler and Matilde Liebelt. Wally was a lifelong vocational agriculture teacher, farmer/rancher, and community activist, receiving multiple awards for his outstanding service to agriculture, students, and the community - including the Audubon Society's distinguished Homer Campbell Environmental Award in 2007. He was a devoted grandfather, a beloved employer of countless college students who worked summers for Eichler Hay Company, and a friend to many. Wally's down-home personality enabled him to establish friendships that lasted throughout his life. In spite of his country-boy demeanor, Wally was highly intellectual. As a graduate student at Oregon State University, Wally excelled in academic work and helped others with less ability. He was very loyal to his friends and cherished their visits until the end of his life. He will be missed by all who knew him. He was a member of the Scottish Rite of Freemasonry 32 Degree Valley of Baker, Orient of Oregon, Past Master of Joseph Lodge No. 81, Elks Lodge Corvallis No. 1413, the Lions Club, the Kiwanis Club, Toastmasters, the Oregon Farm Bureau, the Corvallis Audubon Society and the Nature Conservancy; a past president of the Agriculture Fiber Association; a member of the Oregon Vocational Agricultural Teachers Association; Oregon Hunter Safety Instructor No. 0790; a member of the Future Farmers of America Alumni; an Honorary Oregon State Farmer; a member of the Oregon State University Alumni and the Oregon Seed League; a past president of Oregon Guides and Packers; and a member of the Benton County Soil and Water Conservation District, the Emerald Empire Late Great Chevrolet Club, the Benton/Polk Farmer Safety Committee, and St. Mary's Dinner Club. He loved flying and was a member of the Gooney Bird Fellowship. He earned the nickname "Whitewater Wally" during his 15 years as a whitewater guide on the Rogue River. He was a great elk hunter and an avid auction enthusiast. Wally loved reciting poetry and had a deep appreciation of the American bear. Walter married Mary on May 16, 1981, in Alpine. Survivors include Mary, his wife of 30 years; sons David Eichler DMD, Kenneth Eichler, Eric Swope and son-in-law Maj. Michael Alvis of the U.S. Army; daughters Pam Spahn, Brandy Alvis, Mary Willson, Barbara Wise, Susan Eichler and Cynthia Kapple; brothers Ted and Phillip Eichler and brother-in-law Buck Sims; sister Leslie Sims; 27 grandchildren; and 14 great-grandchildren. He was preceded in death by granddaughter Teresa Eichler; sisters Ellie and Lucy; nephews Tony Eichler and Mike Pettingill; and niece Daphne Pettingill. Services are set for noon Saturday at St. Mary's Catholic Church, 501 N.W. 25th St. in Corvallis. Father John Henderson will officiate. Memorial contributions can be made to the Oregon FFA Foundation, PO Box 2042, Salem, OR 97308.

The family of Walter Eichler created this Life Tributes page to make it easy to share your memories.

Walter Rudolph Eichler Jr., 77, of Corvallis died of cancer on...