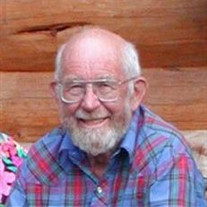 Walter H. Prichard, 84 passed away October 21, 2019 in Corvallis, Oregon. Walt was the oldest child of Walt and Marion Prichard. He is survived by his wife of 64 years, Luree; sons, Andrew (Sharon) and Arthur; grandchildren, Taylor and Morgan; and sister, Mary. He is preceded in death by his mother, father, infant sibling, brother, John and wife Diane, and brother-in-law Howard. Walt was born in Bend and lived his entire life in Oregon. As a youth Walt was a champion in 4-H pig showmanship. He loved all animals and raised dogs, cats, turtles, and fish as pets; and chickens for their fresh eggs. He graduated from Bend High School, and was a lifetime learner. Walt worked many careers in his lifetime. He was a fire fighter; drove bulldozers, built roads throughout central Oregon; was an electrical technician for a cable company; and a building engineer for multiple facilities. He loved restoring historic cars, with his pride and joy being his 1914 Saxon. He won first place in the category of “Antique Automobiles Through 1915” at the prestigious Forest Grove Concours d’Elegance. In addition, he was the editor of the Saxon Times, a world-wide newsletter celebrating all things Saxon. Walt enjoyed racing go carts, watching car races, and was an avid bicyclist. He and Luree traveled across the country six times, four of the six, he rode his bicycle. Together they visited all 50 states. Walt volunteered for 12 years on the Benton County Board of Commissioners Roads Advisory Committee, and belonged to the car club, bike club, Elks club, and local coffee club. Family and friends are invited to his Memorial Service, 1:00 pm, Saturday, November 30th, 2019 at First United Methodist Church, 1165 NW Monroe Avenue - Corvallis, OR. Please share your thoughts and memories for the family at www.demossdurdan.

Walter H. Prichard, 84 passed away October 21, 2019 in Corvallis, Oregon. Walt was the oldest child of Walt and Marion Prichard. He is survived by his wife of 64 years, Luree; sons, Andrew (Sharon) and Arthur; grandchildren, Taylor and Morgan;... View Obituary & Service Information

The family of Walter H. Prichard created this Life Tributes page to make it easy to share your memories.