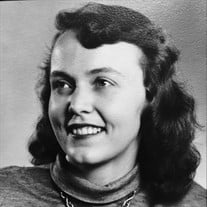 Wanda Tobiassen passed away peacefully at Good Samaritan Hospital on May 10th, 2016 after a brief illness. She left this world in the morning, but not too early, as it was normally her habit not to do anything important until well after the sun rose. She is survived by her sister, Wilma Shuell; her brother, Darrel (aka Jim) Stinson; her sons Mark, (Nicole); Lane, (Sabrina); Paul,(Vickie); and Todd (partner, Laura); her grandchildren Sarah, Randall, Tyler, Jared, Hannah, Alex and Max; and her great-grandchildren Keala and Myles. She will be dearly missed by her family and friends. Wanda was born on August 3rd, 1930, in Hockerville, Oklahoma, a small mining town on the Kansas border. When she was 3 years old, the family moved to the Mojave, California, area where Wanda’s father worked as a miner. As a young girl, Wanda endured bouts with rheumatic fever, which left her bed-ridden for months and caused her to miss graduating from High School. In 1949, the family moved to Nevada City, California, in the foothills of the Sierra Mountains. She lived there with her parents, sister and brother until she met and married a local boy named Bill Tobiassen in 1950. They eventually moved to Portland, Oregon, where they had a son, Mark, in 1960, another son, Lane, in 1962, and then twin sons, Todd and Paul, in 1965. They relocated to Corvallis, where Wanda worked at several jobs after the kids started school. In 1976 Wanda helped incorporate the City of Adair Village, and served as its City Recorder and City Administrator until her retirement in 2000. Wanda co-authored a book about Adair Village, Adair Diary, which was recently published. Though Wanda enjoyed her career, her main focus in life was her boys and their families. Life in Wanda’s household was always hectic, first with her boys and their friends, then with their girlfriends and wives, and then with her grandchildren and great-grandchildren. A couple of beloved dogs, Andy and Scooter, were great companions. Wanda was tested several times over the years by tremendously difficult personal challenges that could have forever dampened her generous spirit. But instead, she faced them with a mixture of compassion, forgiveness, optimism, great humor, and when required, a toughness and resilience that came from a place deep within her soul. Those who loved her knew her to be a great friend and confidant, an unbiased listener who never judged, and a warm and welcoming force to all she encountered. This world is slightly less kind, less hopeful, less tolerant, and certainly less beautiful, without Wanda Tobiassen in it. Services will be held at 10:00 am on Monday, May 16th, at McHenry Funeral Home located at 206 NW 5th in Corvallis. Remembrances may be posted at www.demossdurdan.com.

Wanda Tobiassen passed away peacefully at Good Samaritan Hospital on May 10th, 2016 after a brief illness. She left this world in the morning, but not too early, as it was normally her habit not to do anything important until well after the... View Obituary & Service Information

The family of Wanda June Tobiassen created this Life Tributes page to make it easy to share your memories.