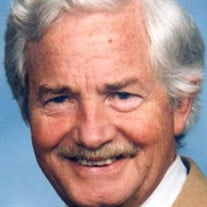 Aug. 17, 1918 – March 18, 2015 Warren Hovland, 96, died peacefully on Wednesday, March 18, at home in Corvallis, with family at his side. Warren was born in Chicago, Illinois, the son of Ole and Augusta Hovland. He graduated Phi Beta Kappa from Lawrence College in 1940. Warren obtained a Bachelor of Divinity degree at Yale in 1943. Following graduation, he was ordained in the Congregational Church and commissioned as a chaplain in the U.S. Navy, where he served in the Pacific during World War II. After the war, Warren attended Yale Graduate School on a Sterling Fellowship. Warren’s graduate research included studies in Cambridge, England, and the Universities of Zurich and Oslo. Warren was appointed an Assistant Professor in the Department of Philosophy and Religion at Oregon State University in 1949, and was granted a doctorate from Yale in 1950. In 1950, Warren married Suzanne Tillson of Evanston, Illinois, with whom he shared many intellectual, cultural, social and spiritual concerns, and a deep commitment to education and the humanities. Their loving partnership lasted for more than 50 years. Warren and Suzanne co-directed American Friends Service Committee summer work camps on the Hoopa Indian Reservation in Northern California in 1953 and 1955, and organized local UNICEF fundraising efforts for several decades. Together, they were strong supporters of music, theater and the arts in the Corvallis community. Avid readers, Warren and Suzanne were among the founders of a monthly book group in the 1950s that became a community of friends whose fellowship they continued to enjoy throughout the remainder of their lives. Warren was the recipient of numerous academic awards and scholarships over the years, including the national Danforth Post-Doctoral Fellowship at Harvard (1957-1958), the OSU Outstanding Teaching Award (1963), the OSU Alumni Distinguished Professor Award, the Danforth Harbison Award for teaching, and a National Endowment for the Humanities Grant at Princeton (1979). Warren made innumerable contributions to the university community during his distinguished career at OSU, including serving as Chairman of the Religion and Philosophy Department (subsequently, the Religious Studies Department) from 1950 until his retirement, as the first President of the Faculty Senate, as a member of the President’s Commission on University Goals, and as Director of the University Exchange Program in Stuttgart, Germany (1975-77). Among his best-remembered courses were those on the Sermon on the Mount, World Religions and a pioneering interdisciplinary course on Bioethics. Warren retired from OSU in 1986, and his legacy at OSU was honored by the renaming of an existing campus building as “Hovland Hall” in 1994. Warren was an active member of First Congregational United Church of Christ, where he served in various leadership capacities and committees, including the Peace and Justice Committee. Other community involvements included the Chairmanship of the Corvallis Task Force on Hate Crimes, and membership on the Corvallis School District Citizens Review Board and the boards of the local hospice, UNICEF and U.N. organizations. In recognition of his service to the community, Warren received the Martin Luther King First Citizen Award. Warren was deeply loved by his family, and will be greatly missed by them and by those students and friends whose education and spirit he nurtured over the years. Warren was preceded in death by his wife, Suzanne; and is survived by his children, Jeremy Hovland and Anne Hovland (Calvin Fujimoto); grandson Kai Hovland; nieces Marie Holmquist (Robert) and Katharine Walvick (Walter); and nephews Kenneth Hovland (Sue), David Hovland (Carol) and Alan Hovland (Linda). The family wishes to express special gratitude to Dr. Steven Athay and the interdisciplinary team at Samaritan Evergreen Hospice for their extraordinary and compassionate care of Warren. In lieu of flowers, memorial donations can be made to the Warren Hovland Scholarship Fund in care of Courtney Campbell, Oregon State University School of History, Philosophy and Religion, 314B Milam Hall, 2520 S.W. Campus Way, Corvallis, OR 97331. A celebration of Warren’s life will take place at a later date.

The family of Warren Hovland created this Life Tributes page to make it easy to share your memories.