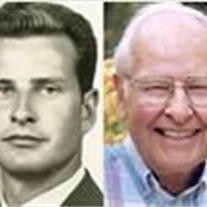 Warren Staton, professor emeritus of the civil engineering department at Oregon State University, died at his home in the arms of his family and devoted caregivers on March 28. Warren was born in Germantown, Pa., on April 4, 1917, to Charles and Mabel Staton. He began his lifelong love of singing at age 12 in the All Saints Church choir in Germantown. He also worked at his brother’s Possum Hollow Nursery after graduating from Cheltenham High School. In 1940 he moved to Puerto Rico to work construction on Vieques Island, where his superintendent introduced him to his daughter, Maryanne Kennedy, who was attending the University of Puerto Rico. Warren and Maryanne were married on July 11, 1943, in Boise, Idaho. In September 1943, both joined the U. S. Navy, Maryanne as a WAVE and Warren as a Seabee (140th Construction Battalion); he served two years in the South Pacific. After the war, he attended Boise Junior College before transferring to Oregon State College, where he earned Bachelor of Science and Bachelor of Arts degrees in 1950 and a Master of Science in civil engineering in 1951. The couple’s love of adventure and travel took them on a five-month bicycle trip through Europe in 1949, extended by five years when Warren took a job with the U.S. Army on reconstruction projects. It was then that they met the Fritze family; the families have remained close since, traveling to each other’s homes and meeting for camping adventures. Daughter Laurie was born in Heidelberg. Warren continued to enjoy traveling immensely during his retirement years. Returning to Corvallis, Warren was employed with CH2M prior to joining the faculty at Oregon State University in 1957. He spent a year in study and research at the University of Wisconsin, Madison, in 1965. He was dedicated to his teaching and took personal interest in his students, counseling and encouraging whenever needed. Many students expressed appreciation for his help at crucial times in their lives. Warren served the city of Corvallis as an engineering consultant and as a member of the Planning Commission and Bicycle Committee. Teaming with his wife of 64 years, he volunteered with the Vina Moses Center, the Grace Center, the Old Mill Center and with many church committees. He had a passion for classical and church choral music. He cherished singing in the choir of the Church of the Good Samaritan for more than fifty years, and also with the Corvallis Barbershop and the Linn-Benton Community Choir. The family has fond memories of joyful singing of hymns, WWII-era sweetheart songs and Beatles tunes with him and for him in the car, around the campfire, by the piano at home and — at the end of his life — around his bed. Warren loved the out-of-doors, expressing constant awe and thankfulness for God’s creation and nature’s boundless diversity and beauty. In the ’70s, Warren and Maryanne designed and built a cabin in Central Oregon, raising beams with block and tackle and roping themselves in to shingle a steep roof. Camping, fishing and hiking were lifetime pursuits with his family. Warren was most grateful for his family above all. He was a devoted husband, father and grandfather who never failed to express his love. He is survived by his wife; his daughters, Laurie Staton, wife of Ian Rothfels, of Salt Lake City, Utah, and Clare Staton, wife of Greg Smith, of Corvallis; grandchildren Adam Staton-Smith, Laurel Staton-Smith and Lily Smith; and nephews Tom Staton of Hawaii and Robert Warren Staton of Florida. A memorial service will be held at 2 p.m. Saturday, April 5 at the Church of the Good Samaritan, 333 N.W. 35th St. Memorial contributions can be made to the Church of the Good Samaritan Music Ministry, Schools of Sinkunia (African Education Project) c/o 2625 S.W. Whiteside Drive, Corvallis, or Oregon State University Foundation (Apperson Hall Renovation) 850 S.W. 35th St., Corvallis

Warren Staton, professor emeritus of the civil engineering department at Oregon State University, died at his home in the arms of his family and devoted caregivers on March 28. Warren was born in Germantown, Pa., on April 4, 1917, to Charles... View Obituary & Service Information

The family of Warren Staton created this Life Tributes page to make it easy to share your memories.