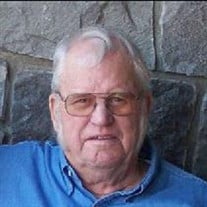 July 7, 1927 — December 15, 2018 With family at his side, Wayne Arthur Kopplien passed peacefully on December 15, 2018. Wayne was born to Lottie Leona (Skaggs) Kopplien and Arthur Robert “Dutch” Kopplien on July 7, 1927, in Corvallis; and grew up on the family farm in Hoskins. At age 17, Wayne enlisted in the United States Navy and served his country as a Seaman First Class. During his military service, he was stationed in Farragut, Idaho, Keyport, Washington, and Bremerton, Washington. As World War II came to an end, Wayne was honorably discharged in August of 1946 and returned to the Corvallis-Philomath area. Never being an attention-seeker when it came to sharing personal stories, Wayne was not reserved about sharing with his family that it was while hanging out on the streets of Corvallis’ Oregon State University area, he met his future bride, Betty (Quetschke) Kopplien. Betty and Wayne said their “I do’s” in Corvallis on November 26, 1954, and began their first year of married life living in Corvallis. After that, they moved to Philomath where they raised their four children, and they spent their next 61 years of marriage in Philomath. For the past four years, Wayne had been residing in Corvallis. Wayne prided himself for being a lifelong logger throughout the decades when Oregon’s timber industry was booming. Friends and family who knew Wayne can attest to his loyalty and strong work ethic when it came to "working in the woods." Throughout his 40-plus years as a logger, Wayne worked for Valsetz Logging (Valsetz), Hoyt Logging (Philomath), Heath Logging (Cottage Grove), Morgan Logging (Philomath), and Ferguson Logging (Albany). Wayne hung up his logger hard-hat and set aside his suspenders and cork boots in 1989 when he retired. Once retired, Wayne and Betty spent time traveling throughout the country via car, visiting and exploring various landmarks, national parks, historical sites, and tourist spots. Wayne's retirement travels did not focus on just one type of attraction, though. Their travel destinations ranged, from Alamogordo’s white sands to The Grand Ole Opry, from Area 51 to Branson museums, from The Grand Canyon to Alaskan glaciers, from Dollywood to Yellowstone Park, and more. Wayne also enjoyed deer and elk hunting, tinkering in his small workshop, and playing cards. When travels eventually slowed down, Wayne became a devotee to the game of pinochle and spent the past 10 years with his card buddies at their weekly pinochle card game gatherings. Wayne is survived by four children, Dawn Lillis (and Tom) of Bend, Julie Cone of Bend, Karen Kopplien of Tigard, and Robert Kopplien (and Kimberly) of Albany; seven grandchildren, Carla Lillis Langford (and Kris), Jolene Lillis Briese (and Jeff), Lacey Cone, Jason Cone, Kyle Kopplien, Dillon Kopplien, and Desarae Kopplien; and four great-grandchildren, Sophia and Miles Briese, and Avery and Grayson Langford. Wayne was loved and admired by many. Family and friends will miss him for his warm smile, his joviality, his kindness, his reliability, and his determination. At Wayne’s request, there will be no services. Contributions can be made in his name to Samaritan Evergreen Hospice in Albany.

The family of Wayne Arthur Kopplien created this Life Tributes page to make it easy to share your memories.