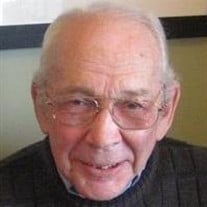 Wayne C. Phillips Wayne C. Phillips, age 90, died June 25, 2016, in Corvallis. The son of Tweed McCoy and Charles D. Phillips, Sr., he was born February 9, 1926, in Portland, Oregon. He received his early education in Milwaukie, Oregon; served in the Army Air Corps during WWII; and completed his bachelor’s in mechanical engineering at Oregon State College in 1949. He married Pat Gibbs on August 29, 1947. The couple made their home in Corvallis until 1971, living in Marin County, California, and in Bend and Portland, Oregon, before returning to Corvallis in 2006. From the time of his graduation until retiring in 1975, Mr. Phillips was associated with the engineering firm of CH2M Hill, for whom he founded the San Francisco regional office in 1970. He was a member of Beta Theta Pi social fraternity and several professional societies. He held engineering licenses in Oregon, California, Washington, Idaho and Montana. He was an avid golfer and private airplane pilot. Another favorite pastime was playing jazz piano. Besides his widow, he is survived by daughters Janet McKensey (and wife Maddy), Corvallis; Robin Donaldson, Corvallis; and Carol Phillips, Monmouth; and granddaughters Emily Donaldson and Arayana McKensey. Also surviving are nephews Dan Phillips, Mobile, Alabama, and Bob (and wife Janet) Phillips, Redding, California. He was preceded in death by his eldest daughter, Cheryl. The Phillips family appreciates the Regent Court memory care staff for enriching Wayne’s life during the past 21 months. In lieu of flowers, contributions are suggested to Benton Hospice Service, 2350 NW Professional Dr., Corvallis, 97330. The family will hold a private memorial service. Please share thoughts and memories about Wayne at www.demossdurdan.com.

The family of Wayne C. Phillips created this Life Tributes page to make it easy to share your memories.