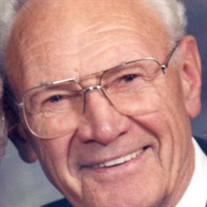 Nov. 4, 1916 – April 12, 2015 William Lawrence Benson (Bill) was born on November 4, 1916, in a farmhouse near Stephen, Minnesota. He died on April 12, 2015, at Good Samaritan Regional Medical Center in Corvallis. He was a strong person, a giving person, a loving person. He was healthy and happy during all the 98 years he spent on this earth. Bill was the second child of Frank and Olga Benson. He grew up during difficult economic times in a land of harsh winters. His values were formed close to the soil in a tightly knit Swedish Lutheran community. Hard work, honesty, loyalty, patience, prudence, sincerity and humility were values he learned at an early age and never forgot. His large hands seemed to transmit those qualities with every firm handshake, which was the only kind of handshake he ever gave. People always will remember that. After graduating from high school, where he excelled as both a student and an athlete, Bill worked for a time on the railroad and then as partner in a grocery store in Stephen. It was then that he met Lorraine Glasrud, a teacher at the local high school, with whom he would form a beautiful marriage for 62 years. When duty called, Bill entered the U.S. Army. During the war years he served at numerous bases around the country, the final one being Camp Adair, with the 104th Infantry Division (Timberwolves). He and Lorraine then realized that they wanted to spend the rest of their lives in Corvallis. Corvallis and its people were important to Bill. For several decades he owned and operated a number of businesses, the best known of which was Jensen’s (later Benson’s) paint store on Second Street, now the site of American Dream Pizza. He was intensely and genuinely interested in helping his customers and would go to great lengths to assist them, including after hours and on weekends. He was an active participant and leader in many business and community organizations. He immensely enjoyed working with friends and fellow citizens, and it showed. They honored him with important awards for community service, which he humbly accepted while always emphasizing that it was teamwork that made accomplishments possible. For his work as a member of the Corvallis Chamber of Commerce, he received the Chamber Award for “Hours Spent Coordinating Development of Kermit Roth Gateway Park.” In addition, he received the “George” Award in 1985 and again in 1990; the Helping Hand Award in 1987; the Chamber Appreciation Award in 1990; and the Chairman of the Board Award for 1992-93. Bill was chairman of the Corvallis School Board from 1962-67, a longtime member of the Board of the Good Samaritan Hospital Foundation, and honorary trustee of that foundation beginning in 1988. He was an enthusiastic supporter of Old Mill Center. He also rendered significant service to the Boys & Girls Club of Corvallis, the Kiwanis Club and the Benton County Historical Society. He was a charter member of the Corvallis Ambassadors and the Corvallis Community Club, as well as a lifetime member of Corvallis Elks Lodge 1413. In 1988, Bill was selected Senior First Citizen of Corvallis. Faith and church were an integral part of Bill’s life. He was a practicing Lutheran who deeply believed in Christian values and teachings, expressing them through his actions in everyday situations as well as through substantial participation in Grace Lutheran Church. He was instrumental in the growth of that church, supporting its spiritual mission as well as its projects for building and improvement to its physical facilities. In 1968 he served as building chairman for the construction of the present church. As a proponent of virtually everything Oregon has to offer, Bill found it easy to be an enthusiastic Beaver fan. He was the complete fan, up to date on all Oregon State University sports happenings, and always ready to discuss results and hopes for the future. He was a member of the Beaver Club, attended hundreds of games in person, and followed hundreds more on radio and TV. He was not an OSU alum, but most people must have thought otherwise. Bill always was fascinated by the spectacular natural setting in which he lived: the fertile valley, the Cascades, the forests and the sea. He would never tire of looking at the ocean and walking in the sand. Family outings almost always would end up close to Newport. During the first years in Oregon, Bill frequently fished for salmon, but later concentrated more on simply eating it. He also enjoyed drinking Oregon wines on site at many picturesque Willamette Valley wineries. In his final years Bill became an advocate for Willamette Valley filberts. In early fall he would purchase several large sacks of those delicious nuts and then send boxes of them to family and friends from Alaska to Michigan. Above all, Bill was a family person. He was a constant source of encouragement and wise counsel for his children and for their children, in addition to assisting them and comforting them in good times and in difficult moments. He was a very humble man, always showing kindness to those around him. He put others before himself. He was preceded in death by his parents; his wife, Lorraine; and siblings Emmy Kruse, Gladys Halfmann and Arnold Benson. He is survived by his brother Harold Benson; sister Lucille Oligney; son John (Seidy); daughter Mary (Toney); six grandchildren; and 14 great-grandchildren. He loved them all. He will be greatly missed by these people, as well as by cousins, nieces and nephews, and his many friends. Bill Benson was a man of God. Bill Benson was a good man. A service will take place at 11 a.m. Saturday, May 2, at Grace Lutheran Church. You can leave your thoughts and/or condolences at www.demossdurdan.com. In lieu of flowers, contributions can be sent to the Grace Lutheran Church Foundation, 435 N.W. 21st St., Corvallis, OR 97330; or the Good Samaritan Hospital Foundation, 3600 N.W. Samaritan Drive, Corvallis, OR 97330.

The family of William Lawrence Benson created this Life Tributes page to make it easy to share your memories.