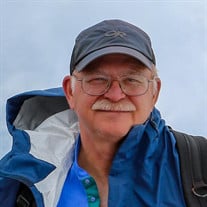 William George Earley, 63, of Corvallis, Oregon, died suddenly on Saturday, June 15, 2019, a few hours after riding his bicycle up and over McKenzie Pass in Oregon’s Cascade Mountains. The previous day he hiked with his wife and daughter surrounded by wildflowers and snow-covered peaks. He was doing what he loved, in a place he loved, with the people he loved. For that, we will always be grateful. Born in Springfield, Massachusetts, Bill was the beloved son of Robert W. Earley (who preceded Bill in death by two weeks at age 97), and the late Arlene Webster Earley. Bill loved the outdoors and spent the best moments of his life hiking, bicycling, rock climbing, skiing, running and camping. He summited Mt. Rainier and many other Cascade peaks along with most of New York’s 46 Adirondack High Peaks, and mountaineered in Ecuador and the Alps. He trekked the Annapurna Sanctuary in Nepal and rock-climbed countless routes in the Shawangunks, Rockies, Black Hills and elsewhere. In the late 1980’s Bill was active in the Albany (NY) chapter of the Adirondack Mountain Club, leading bike rides and hikes, maintaining trails, and meeting the woman who became the love of his life. With his wife, he canoed Adirondack ponds, kayaked Oregon rivers, explored National Parks, and captained their tandem bicycle while she pedaled behind him as stoker. Bill was an accomplished cross-country runner throughout high school (Worthington, OH) and college (Miami University of Ohio). He earned his Ph.D. in Organic Chemistry from the University of Vermont in 1984. His 25-year pharmaceutical research career included positions at Sterling Winthrop (Rensselaer NY), Nycomed (Malvern PA) and AMRI (Albany NY). In 2009, he began a new career in nanotechnology at the College of Nanoscale Science & Technology (Albany NY). Bill and his family lived in East Greenbush, NY for 18 years before moving to Corvallis, where Bill enjoyed doing photoresist research for Inpria Corp. Bill is survived by his loving wife of 26 years, Mary Beth (nee Aniano), son Christopher, and daughter Samantha; sister Margaret DeVolt of North Bend, WA; sister Marilyn Renfrew and her husband Roger of Skowhegan, ME; niece Megan Renfrew of Baltimore, MD, nephew Travis DeVolt of North Bend, WA, and nephew Ira Renfrew of Arlington, MA; and by aunts, uncles, cousins and 5 great-nephews and -nieces. A celebration of Bill’s life will be held in Corvallis on Friday, July 12 from 2:00 to 5:00 pm at Walnut Barn in Martin Luther King, Jr. Park. Casual attire is requested for this picnic-style gathering. Guests are encouraged to bring a favorite dish, wine or beer. Children are welcome to come and play. An open mic sharing of stories and memories will begin at 3:15. A dual memorial service for Bill and his father will be Saturday, August 17, 2:30 pm at the United Church of Underhill, Vermont. Bill’s family would be pleased if you would use this website (www.demossdurdan.com) to upload photos and share memories of your adventures with him. In lieu of flowers, those wishing to honor him in a special way are asked to make a donation to “Albany Chapter – ADK” (Adirondack Mountain Club), P.O. Box 2116 ESP Sta., Albany, NY 12220. Please write “In memory of Bill Earley” on your check. If you prefer, make a Memorial Gift to the Sierra Club by visiting https://www.sierraclub.org/giving/commemorative-gifts. True to form, Bill has hiked on well ahead of us. As we follow his footsteps, we will keep him forever in our hearts.

William George Earley, 63, of Corvallis, Oregon, died suddenly on Saturday, June 15, 2019, a few hours after riding his bicycle up and over McKenzie Pass in Oregon&#8217;s Cascade Mountains. The previous day he hiked with his wife and daughter... View Obituary & Service Information

The family of William George Earley created this Life Tributes page to make it easy to share your memories.