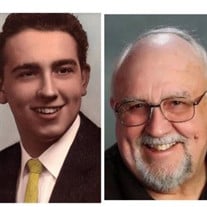 William “Bill” Kenneth Freeman, age 75, of Philomath, Oregon, passed away at Good Samaritan Hospital on Thursday, December 1st, 2016, from complications due to cancer. Bill was born in Boring, Oregon on February 13, 1941, to Kenneth Eugene Freeman and Ruth Elsie Frieda (Ide) Freeman. He was the youngest of 5 children. He was a 1959 graduate of Corvallis High School and also attended Concordia Bible College in Portland, Oregon. Later he received a Degree at Linn Benton Community College. He met the love of his life, Dawn Marie Summers, in 1956, and, after serving his country in the United States Army from 1960 to 1962, they were married on October 27th, 1962. He was affectionately dubbed “Billy” by Dawn. They resided in the Albany and Corvallis, Oregon area. They were married 40 years before Dawn passed away in 2003. Bill was employed by Mutual Produce, then managed a Texaco Station for several years before becoming an Energy Consultant with Consumers Power, Inc. After retiring, he sold real estate through Landmark Realty. In his younger years he loved fishing with his brothers, Keith and Gene, and later on one of his favorite activities was going antiquing with wife, Dawn, and their life-long friends Ron and Debbie Shipman. He would tell you his greatest achievement was his family. He loved them dearly and would do anything for them – from killing spiders, to changing flat tires, to loaning money he didn’t really have, to supporting them in any endeavor they showed an interested in. Bill will forever be remembered as a loving, kind, warm and generous man with a brilliant smile and a big heart. He was welcoming to everyone he met and made an indelible impression on all who were privileged to know him. Bill is survived by daughter, Laurie Davison (Randy) of Corvallis, daughter, Lisa Speers (Jamie) of Salem, son, Ryan Freeman (Ashley) of Florida, son, Rick Freeman (Johnnie) of Philomath, daughter-in-law Carlea Freeman of Lebanon, grandchildren, Justin (April), Trevor (Michelle), Tyler (Ericca), Kyle (Kayla), Megan, Chad, Dylan, Carly, Avery, Cassidy, Macy and Chloe; sister, Darlene Fotopoulous of Albany, brother, Keith Freeman (Sharon) of Redmond, sister-in-law, Fawn Drewel (Ken) of Prosser, WA, sister-in-law, Kathy Albrich (Steve) of Lebanon, brother-in-law, Fred Fuller of Cottage Grove, as well as a multitude of nieces, nephews and friends he loved dearly. He was preceded in death by his parents, his brother, Eugene Freeman, his sister, Bernice Fuller, and his beloved wife, Dawn. A Celebration of Life will be held at Life Community Church, 4900 NW Hwy 99W, Corvallis, Oregon on Saturday, January 21st, 2017, at 2:00 p.m. with a small reception to follow in the church fellowship hall. Memorial contributions can be made to the American Cancer Society at www.cancer.org.

The family of William Kenneth Freeman created this Life Tributes page to make it easy to share your memories.