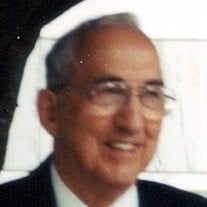 William (Bill) Despain Fryer December 17, 1927 – October 24, 2013 Bill was quiet man that served his fellowman all his life. He did not seek the limelight but looked for ways to help and serve. He was a man of Integrity, honesty, and industry He had a deep love and devotion to Heavenly Father, family, friends, and community. Bill passed away at the age of 85 on October 24, 2013 at the Samaritan Evergreen Hospice House in Albany, Oregon, due to complication from Parkinson Disease. He was born to Thomas Robin Fryer and Tessa Maude Despain Fryer on December 17, 1927 in Stayton, Oregon the fourth of seven children. He grew up in Detroit, Oregon where he developed a great love for the outdoors as he hiked, fished and hunted with his siblings in the Cascades. Bill graduated from high school in 1946 in a class of eight. In his junior year of high school his basketball team won the state championship for his league. He served in the military in Korea. He then spent 2 ½ years on a mission for The Church of Jesus Christ of Latter-Day Saints serving in New Zealand. After his mission, he married Louisa Faye Callahan in the Idaho Falls Temple, October 13, 1953. They had four children, one daughter and three sons. Bill received his bachelor and master degrees from Oregon State University in Education and began his teaching career at Franklin Elementary School in Corvallis, Oregon. He has served as principal of Inavale, Roosevelt, Mountain View, Wilson and Adams Elementary Schools. He served as President of the Corvallis Education Association (CEA). While serving as principal at Adams, Bill and Faye started a business of small group homes caring for the elderly. He retired early from education as their business of care homes for the elderly grew. After retiring from their second career, Bill and Faye served two missions for The Church of Jesus Christ of Latter-day Saints in Serbia (2 year) and Croatia (18 months). Then they served 3 ½ years as the Alpine Camp Managers for the church. Bill loved returning to the forests of his youth, the quiet walks, taking care of the land and befriended the wildlife. They enjoyed working with the youth that came for camps during the summer months. Bill served 13 years working in the Portland Oregon Temple, serving 10 of those years with his wife, Faye. Throughout his life, Bill served faithfully in his various church callings, some of those responsibilities were the church farm master, scout master, elder quorum president, seventy, bishopric counselor, high counselor, and teacher. Bill is survived by his spouse, Louisa Faye Fryer; four children – Jessie Marie (Brent) Boyter, William Robin (Mary) Fryer, John Robert (June) Fryer, and Richard Allen Fryer; 13 grandchildren and 32 great-grandchildren. Bill was preceded in death by this grandson, Austin Fryer. The viewing will be held Saturday, November 2, 2013 at The Church of Jesus Christ of Latter-day Saints, 4141 NW Harrison Blvd, Corvallis, Oregon from 9:30 am until 10:45am. Funeral services will follow at 11:00 am. Interment at Twin Oaks Cemetery, Albany. In lieu of flowers, donations may be made in Bill’s name to Samaritan Evergreen Hospice, 1046 Sixth Ave. SW, Albany, OR 97321

William (Bill) Despain Fryer December 17, 1927 &#8211; October 24, 2013 Bill was quiet man that served his fellowman all his life. He did not seek the limelight but looked for ways to help and serve. He was a man of Integrity, honesty, and... View Obituary & Service Information

The family of William D. Fryer created this Life Tributes page to make it easy to share your memories.