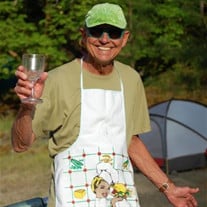 We lost an amazing character and generous friend on December 14, 2018 when Bill Hogsett died unexpectedly. Bill and his sister, Becky, were raised in Crane, Texas, a west Texas oil boom town that numbered about 2000 people in Bill’s youth. Bill left Crane on a scholarship to The Julliard School to develop his already recognized musical talent. After a year in New York City he returned to Texas with the knowledge that what you like is not necessarily how you want to earn your livelihood. He graduated from Texas Christian University in biological sciences and enrolled in the biochemistry graduate program at Baylor School of Medicine where he attracted attention because of his long blond ponytail on which the Dean of Students placed a bounty. After receiving a PhD in biochemistry, with his ponytail still intact, Bill did a post-doctoral program at Oregon State University and a second at the University of Washington. He joined the US Environmental Protection Agency in Corvallis in 1980 as a plant physiologist, focusing on the effects of air pollution on crops and forests across the US. During his 29 years of federal service, he authored dozens scientific articles and was a principal author on two Criteria Documents which provide the scientific basis for establishing National Ambient Air Quality Standards. He retired in 2009 with over 30 awards for his science and leadership with the Agency. Bill was an adept storyteller and he loved to tell of his adventures and misadventures. He generated many stories from white-water and sea kayak and raft expeditions. Because of arthritis, he more recently continued his white-water travels serving as a “hood ornament for rafts.” In 1986, Bill had a life changing medical mishap when he lost his pancreas and “most of his guts” in an operation for suspected pancreatic cancer. Bill accepted this outcome of the surgery without bitterness and proceeded to learn how to live with brittle diabetes and to lead an active and athletic life for over 30 years, serving as a model for countless people who had “all their guts” and far surpassing the medical predictions. Bill attracted friends like a puppy. People gravitated to Bill to hear his tales but he was also a good listener and easily established a rapport even with strangers. Bill’s home was never locked, encouraging people to drop in whenever. Twenty years ago, Bill started an amazing tradition: dinner for friends, and even strangers, was prepared with festivity every Thursday night at his home year-round. This tradition created a “tribe” of friends that have helped each other and Bill countless times. Bill also loved kids; scores of kids knew him as Uncle Bill. He delighted in teaching youngsters to turn on faucets, leaving it to the parents to teach them how to turn faucets off. Bill remained friends with these children into maturity to then become an uncle of their children. Bill possessed an artistic flair, first evident with the piano in his youth which later extended to photography, bonsai gardening, landscaping and designing a unique home that interacted with the landscaping. To be around Bill was to be surrounded by beauty enlivened with certain quirks. We are so sorry to see you go, Bill. You enriched the lives of so many people in whom your memory will live on. Graveside service will be at 1:30 p.m. on Saturday, December 22 at Locke Cemetery, at 5610 Locke Cemetery Road, Corvallis. A life celebration for Bill will be held at 5:30 p.m. on April 6 at the Boy Scout Lodge in Philomath. “If you’re going to walk on thin ice you might as well dance”

We lost an amazing character and generous friend on December 14, 2018 when Bill Hogsett died unexpectedly. Bill and his sister, Becky, were raised in Crane, Texas, a west Texas oil boom town that numbered about 2000 people in Bill&#8217;s... View Obituary & Service Information

The family of William Edward Hogsett III created this Life Tributes page to make it easy to share your memories.

We lost an amazing character and generous friend on December...