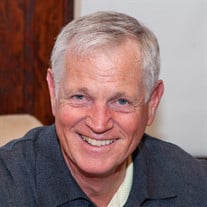 Dr. William (Bill) Lloyd passed away September 27th after a brief battle with cancer. Bill was born in 1940 in Topeka Kansas, the 4th of 5 children. His sister, Linda Kaiser and brother, James Lloyd survive him. Bill attended the University of Kansas where he met his loving wife, Gerry. Bill graduated from The University of Kansas Medical School in 1967, then served as a Captain in the Air Force stationed in Iceland as a Flight Surgeon. Bill and Gerry then settled in Corvallis, where he practiced radiology for 25 years, and they raised their two children, Bill Jr. and Jennifer. Bill was an avid and accomplished fly fisherman and spent many years on the Rogue and Deschutes rivers, not just fishing, but actually catching steelhead. Few were the times when Bill returned from a fishing trip and had to subject his family to a hamburger dinner. After retiring in 1998, Bill and Gerry divided their time between Corvallis and Scottsdale, Arizona. They enjoyed hiking, cycling, traveling the world, and driving the 1961 Alfa Romeo Giulietta Spider which he’d restored from boxes of parts trailered out from Illinois. Upon delivery, he found no fewer than 25 hornets nests in the engine; fortunately the hornets failed to accompany the car on its journey west. Bill could be found driving no faster than the speed limit on any twisty 2-lane road between Corvallis and Alsea. An avid golfer, Bill was proud of shooting 4 under his age, an even par, at the age of 76. After retirement, he spent many happy hours in his wood shop, creating beautiful furniture for the house. Bill was fond of spending time with his children. He completed Cycle Oregon 5 times and recently returned to Iceland for a photography trip and visit to Keflavik AFB with his son Bill Jr. He loved to take Jennifer fishing and camping on the Deschutes, and was proud to take her back to Kansas to visit his old KU stomping grounds. Bill leaves his wife of 55 years, Gerry, his son Bill Jr. and wife Paola, his daughter Jennifer Lloyd Kelly and husband Ryan, 3 grandsons: Bill III, Lachlan, and Quinn. All miss him very much, but are grateful for the time they had with him, and that he was able to go out on his terms. Memorial donations in Bill’s name may be made to Lumina Hospice and Palliative Care, 720 SW 4th St, Corvallis, OR 97333. www.luminahospice.org. A celebration of Bill’s life will take place at a later date in Scottsdale, AZ. Those interested in details can email blloyd+[email protected] Please share your thoughts and memories for the family at www.demossdurdan.com.

Dr. William (Bill) Lloyd passed away September 27th after a brief battle with cancer. Bill was born in 1940 in Topeka Kansas, the 4th of 5 children. His sister, Linda Kaiser and brother, James Lloyd survive him. Bill attended the University... View Obituary & Service Information

The family of Dr. William K. Lloyd created this Life Tributes page to make it easy to share your memories.