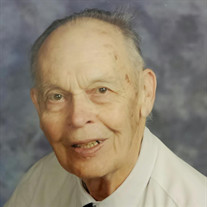 William “Bill” Mark McKinney December 26, 1923 – May 5, 2016, age 92 Bill McKinney has returned to the Great Roundhouse at the end of a ninety-two year trip around the United States. Bill now has a free pass on all rail lines; the trains always run on time; and the dining cars only serve gourmet food. And, they let him ride in the cab. He was born December 26, 1923, in Spring Valley, New York, the youngest of the four children of John and Mabel McKinney. In 1930 the family moved to Port Jervis, New York where Bill completed his youth. He graduated from Port Jervis High School in 1940, at age 16, after winning several prizes in history, science, and math. Bill started his higher education at North Carolina State University, majoring in chemical engineering. After one year he transferred to the University of North Carolina at Chapel Hill, to major in chemistry. After three semesters he went into the US Navy in January, 1943, but was given a medical discharge during basic training. In 1944 he started at New School University in New York City. Alternating between work, day classes, and night classes, he achieved a bachelor’s degree in General Studies in January, 1948. Immediately Bill took a graduate school fellowship at the University of Florida, in Gainsville, studying social sciences and geographical sciences, finishing in February, 1949, just one year, with a master’s degree in Geography and Social Sciences, with membership in Phi Kappa Phi national academic honorary. September, 1949 found Bill at Washington State University, Pullman, working on a PhD, supporting himself as a teaching assistant of classes in sociology and anthropology. Here he met Georgia Coleman from Colfax, WA, an Education major at WSU, marrying her June 1, 1951. They remained married until her death in 2003. Their only son, Mark Warren McKinney, was born in 1953 (d.1991). An academic highlight at WSU was participating in an archeological dig at Moses Lake, WA, under a Smithsonian grant. They found numerous Native American artifacts, and excavated a pit house. In 1952, after an academic disagreement, without completing the PhD., Bill and Georgia moved to Atlanta, GA, where Bill worked for the Department of Public Health, specializing in hospital planning and location. After several years there Bill returned to the University of Florida to write up what he had learned on the job, a pioneering PhD thesis, Geographical Aspects of Hospital Location, graduating in 1958. The McKinneys then moved to Ashland, Oregon where Bill taught physical geography at Southern Oregon College. Five years later the family moved to Wisconsin where Bill worked at the University of Wisconsin at Stevens Point, mostly teaching physical geography, geology, and oceanography. One of his successes was a National Science Foundation Grant in 1968 to study atmospheric phenomena on Mars, at the Lowell Observatory in Arizona. He was paid the first summer, and volunteered there several more summers. Bill finally retired from academia in 1988, as a full Professor, with listings in Who’s Who in America, and Who’s Who in American Science. He could communicate in Latin, German, Italian, French, and Spanish. Being sensible, having traveled throughout the United States and much of Europe, Bill and his family retired to Corvallis, Oregon. While his wife gardened, Bill became a member of the Corvallis Society of Model Engineers. He had a lifetime passion for trains learned from his father, an engineer on the Erie RR. Given a choice, Bill always took Amtrak instead of flying. They both took up watercolor painting in Corvallis. After his wife died Bill became an active member of the Unitarian-Universalist Fellowship of Corvallis. Well into his 90’s he was willing and able to talk clearly and sensibly about geology, geography, history, politics, and railroadiana with all comers. Bill is survived by 10 nieces who would like to thank the staff at the Caring Place and Samaritan Evergreen Hospice House for the exceptional care and love Bill received while in their care. Family and friends are invited to a Memorial Service, 1:30pm, Thursday, May 26, 2016, at the Unitarian Universalist Fellowship, 9245 NW Circle Blvd, Corvallis. Reception to follow. If desired,donations can be given in Bill’s name to the Corvallis Chintimini Senior and Community Center, (2601 NW Tyler Avenue, Corvallis, Oregon 97330 ) or the Unitarian –Universalist Fellowship of Corvallis, (uucorvallis.org)

The family of William Mark McKinney created this Life Tributes page to make it easy to share your memories.