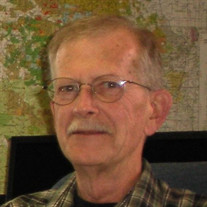 Jim Mills passed away of natural causes at the Good Samaritan Regional Medical Center on Feb. 3, 2016. The family would like to thank the staff at the Good Samaritan Regional Medical Center for their compassionate care of Jim during his last days. His immediate family was able to be at his side much of the time. He was born to William W. Mills and Anne Reese Mills in Red Wing, Minnesota, on Jan. 22, 1942. Shortly after his birth, his family moved to Minneapolis, Minnesota, while his father completed graduate school at the University of Minnesota. Jim was joined 18 months later by his sister, Carolyn “Cammie.” In 1956, the family moved in their 1949 Chevrolet to Corvallis where his father took a job at OSU as a Doctor of Psychology. Jim and Cammie attended Harding Grade School, Highland Middle School and Corvallis High School. He graduated from CHS in 1962. Immediately following high school graduation, Jim joined the U.S. Navy. He was stationed in Dugway, Utah, and then as a Project Shad Tech-Staff on the USS Granville S. Hall in the Pacific Ocean. When on shore, he was in Pearl Harbor, Hawaii, where he learned to ride and love motorcycles. Following his discharge from the US Navy in 1964, he returned to Corvallis. He attended OSU part time, achieving sophomore level status. Over the next nine years, he held a variety of employment positions including several employers, each time learning new skills providing a willing and focused employee. Sites included Good Samaritan Hospital, Brand S Plywood Co., R3 Engraving Co., and CH2M Hill. From 1969-73, he served as the administrative assistant for the Benton County Board of Commissioners. Jim took flying lessons on the GI Bill and earned his pilot’s license. Flying was his first and lasting passion. He earned flight instructor status and an Airline Transport Flight Certificate. As a pilot, he held several positions as a flight instructor, FFA Pilot Examiner and charter pilot, working his way at some sites into office manager. Locations included Flyways in Albany; Mary’s Peak Aviation and Bertea Aviation in Corvallis; Advanced Technologies in Portland; and Concept 2000 Inc. in Lebanon. For several years Jim was chief pilot and executive assistant for Frank Ramsey of Coca Cola, Corvallis. Following Mr. Ramsey’s death, he flew for Horizon Airlines. He worked briefly for Randy Jones Chevrolet-Oldsmobile as a sales consultant and worked for Professional Auto Detailing. In 2001, Jim took a position as office specialist for the Oregon Department of Forestry at their office in Philomath. He remained in that position until his retirement in 2013. He then worked part time for B & G Logging & Construction in Philomath. In 1967, Jim married Nancy Maxwell of Philomath. They later divorced. On July 28, 1987, Jim married Charlotte Ann (Batey) Allen on the Benton County Courthouse lawn. Their marriage was blessed by the arrival of their son, James Reese Mills, on March 18, 1989. Their family included Charlotte’s adult two sons, from a previous marriage, Tad and Adam Allen. Jim was an avid Harley-Davidson fan and owned several Harley’s over his lifetime. He had many friends and acquaintances in the Harley community. Jim was a loving and loyal husband, father, brother, and friend. His capacity for learning and teaching was phenomenal. He was adept at learning new skills throughout his life and he became quite proficient in computer work. Jim is survived by his wife of 28½ years, Charlotte; son James, Eugene; stepsons Tad Allen (Carol) and Adam Allen (Deri); guardian niece Helen Allen Iliff; and stepgrandchildren Josh and Trenton Allen, and Madeline Allen. Also surviving are his sister, Carolyn “Cammie” Bella; husband David Bella; and nephews Steve and Jon Bella and David O’Shaughnessy. An informal gathering of family and friends will take place later. End of life arrangements were done by DeMoss-Durdan Funeral Home and Crematory.

The family of William James Mills created this Life Tributes page to make it easy to share your memories.

Jim Mills passed away of natural causes at the Good Samaritan...