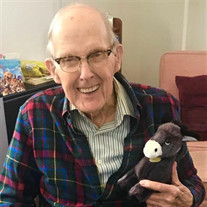 William Willis Paarmann March 19, 1925 – December 10, 2021 William (Bill) Paarmann was born in March 1925, in the Seattle area. His parents raised him in Albany, Oregon along with his brother, Hugo and sister, Doris. When WWII arrived, he joined the Army Infantry and toward the end of his service, travelled to La Havre, France. Home on leave, he married his high school sweetheart Marion Haley. They were married 73 years until her passing in 2019. Returning home to live with Peggy, Bill enjoyed their morning walks, lots of jigsaw puzzles, and visits from friends until the Pandemic began. From then on, Peggy & Bill enjoyed drives to see familiar places and making lots of new memories. Bill was very proud of his military service, and his years as a home builder and businessman. He actively supported SkyDog Sanctuary near Bend, where he has a rescued donkey which they named for him: “Billy the Kid”. He led a long and very productive life, always with a kind word for anyone he met. His faith was very important to him, and he was one of the three original founders of Northwest Hills Baptist Church. He passed away at 10:33 am on December 10th with his beloved daughter Peggy at his side. Interment services will be held 1:00 pm, Friday, March 18, 2022, at Willamette National Cemetery in Portland, with full military honors. Donations in his memory can be made to SkyDogRanch.org, which will enable them to rescue more donkeys and horses. He is survived by his daughter Peggy, of Corvallis, niece Shannon Willard, niece Joann Tolles and nephew Tommy Paarmann. He will be missed beyond measure.

William Willis Paarmann March 19, 1925 &#8211; December 10, 2021 William (Bill) Paarmann was born in March 1925, in the Seattle area. His parents raised him in Albany, Oregon along with his brother, Hugo and sister, Doris. When WWII arrived,... View Obituary & Service Information

The family of William Willis Paarmann created this Life Tributes page to make it easy to share your memories.