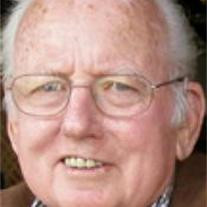 Corvallis resident William Roberts unexpectedly died at his home in Corvallis after a fall. He was 91 and just days short of celebrating 69 years of marriage to Margaret. Will was born in San Francisco to Leah and Walter Roberts, and grew up there with his younger brother, Lee. At the time World War II started, Will was employed in the fledgling computer industry in San Francisco, assisting with development of early room-sized computers. This technology was seen as crucial to the war effort, constraining Will from joining up to do his bit in the traditional way. Finally, though, in 1943, he insisted on enlisting in the U.S. Army, only to be stationed with the Army’s computer development enterprise in Stockton, Calif., for the duration of the war. After the war, in 1948, Will and Margaret moved to Burlingame, Calif. There they raised their two children, Don and Jan. Will worked in data processing at the Veterans Administration in San Francisco. His family enjoyed his adventurous spirit, as he trekked them to endless back roads and high-country views of California and beyond. Many of those trips to “beyond” involved Hawaii, where Will loved the beaches so much. After their retirement, Will and Margaret were even more free to travel, and pretty much covered all 50 states over the years. They also enjoyed multiple trips abroad. They created a wonderful life within the same family home for 54 years. Throughout, they maintained close contact with childhood friends, particularly the “Pinochle Group,” and had “happy days” with family, neighbors and members of First Baptist Churches in both San Francisco and Burlingame. In 2002, they finally succumbed to Jan’s lobbying and moved to Corvallis. Will was preceded in death by his parents, Leah and Walter, and his younger brother. Will is survived by his wife, Margaret, of Corvallis; son, Don Roberts and wife Susie of Burlingame; daughter Jan Roberts-Dominguez and husband Steve Dominguez of Corvallis; nephew Gary Roberts of Sacramento, Calif.; nephew Ken Roberts and wife Bonnie of San Jose, Calif.; and six admiring grandchildren, Brandon Dominguez and wife Julie of McKinney, Texas, Bryan Roberts and wife Suzanne of Virginia Beach, Va., Ryan Dominguez and wife Asta of Reno, Nev., Jeremy Roberts and wife Katie of Lafayette, Calif., Meredith Roberts Clark and husband Ed of Bethesda, Md., and Gregory Roberts of Burlingame. He also leaves five marvelous great-grandchildren in Anna, Lily, Emily, Matthew and Ella; grandniece Rochelle Mapes; grandnephew Ryan Roberts; and great-grandnieces Audry and Taylor. Will was a gregarious lover of people, ever looking to strike up conversations with perfect strangers. He was unfailingly kind, quick to laugh and relentlessly generous. He was a devoted husband, a loving father, a supportive grandfather and a proud great-grandfather. He was a dedicated outdoorsman who instilled his love of camping and hiking in his children. Besides his family, his greatest love was Yosemite. Almost every summer throughout his life, he spent at least a week camping in the Valley, enjoying the high country, and marveling at the falls, El Capitan, Glacier Point and Half Dome, which he climbed six times. Even when traveling abroad, he would remark to other tourists that “It’s pretty, but it is not Yosemite.” This past summer, Jan took both parents on an 1,800-mile road trip through Northern California, and, joined by Don and Susie, made one last pilgrimage to the Yosemite he loved so much. His favorite saying was “All is well,” and at that time it certainly was. A celebration of a life well lived will take place in the spring. In lieu of flowers, donations to the Yosemite Conservancy (101 Montgomery St., No. 1700, San Francisco, CA 94104) would be appreciated.

Corvallis resident William Roberts unexpectedly died at his home in Corvallis after a fall. He was 91 and just days short of celebrating 69 years of marriage to Margaret. Will was born in San Francisco to Leah and Walter Roberts, and grew... View Obituary & Service Information

The family of William Roberts created this Life Tributes page to make it easy to share your memories.