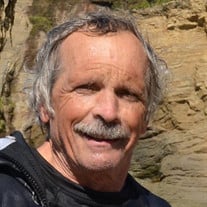 March 13, 1950 – September 2, 2020 Bill Schaub was born on March 13, 1950 in Takoma City, Maryland to William and Katherine Schaub. He died on September 2, 2020 in Corvallis. Bill spent his childhood around the Washington D.C. area. He especially enjoyed Rehoboth Beach, where he learned to drive his family’s VW bug and to surf. In 1977, he followed his brother, Rick, to live on the Oregon coast. Eventually, the entire Schaub family made its way to Oregon from the east coast, settling in Newport, Corvallis and Portland. In 1982, he became a loving father to his daughter, Rhyan. In 1992, he met Jill, who he would marry and share the rest of his life with. As his parents aged, he was a wonderful caregiver and friend to them, visiting them daily for them for the better part of a decade. Bill studied at the University of Virginia and completed his studies at Oregon State University where he earned a Bachelor of Science in Psychology. After some work as a youth counselor, he went on to become a building inspector and official, working at several cities in the Willamette Valley. He inspected many projects, large and small, and took pride in ensuring the work was done well. He was an avid Beaver fan, especially enjoying football and women’s basketball games. He loved his family, his pets, biking, surfing, working on cars and being in nature. He enjoyed ham radio, chatting with folks near and far under the call sign WZBLY, and he was a control operator on the DipSea network. Bill is survived by his wife, Jill Sono Shinkawa, his daughter Rhyan Ainsley Schaub-Crosby, and his son-in-law Matthew Stephen Crosby. He was preceded in death by his parents Kathy Valliant Schaub, William Clark Schaub, and his brother Richard Michael Schaub. Due to COVID-19 restrictions, a small private service is planned. Please use this tribute page to share your memories of Bill and offer support to family and friends. If desired, memorial contributions in Bill's name, may be made to the Heartland Humane Society (https://heartlandhumane.org).

The family of William "Bill" Schaub created this Life Tributes page to make it easy to share your memories.