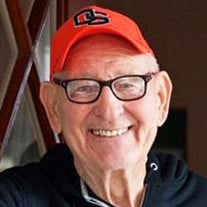 On Wednesday, November 28, 2018, William “Bill” Warren, passed away at the age of 97. Bill was born on December 18, 1920, in Hollis, Oklahoma to Arnold and Hadie Marie (Rowell) Warren. He had four wonderful sisters, Ina Mae, Margaret, Sue, and Melba. On April 4, 1942, he married Wilma Farris, in Houston, Texas. Soon after, Bill and Wilma moved to Montebello, California. Bill was inducted into the US Army in 1942. He served in the Pacific with the 33rd Infantry Division for 2 ½ years. He received the Purple Heart Medal after being wounded near Bagio City in the Luzon Islands along with the Distinguished Service Cross for extreme gallantry and risk of life in combat. He was honorably discharged from the Army in November 1945 at Fort McArthur, California. Bill and Wilma lived in Whittier, California for over 60 years, where they raised their daughter, Gwyn. Bill worked in the sheet metal industry until his retirement in 1985. His beloved wife, Wilma, passed away in 2009. Shortly thereafter Bill relocated to Corvallis, Oregon, with his daughter. Most recently he was a resident at Mennonite Village where he was lovingly cared for by their excellent staff. Bill and Wilma were avid bowlers, attended many state and national tournaments, which allowed them to travel and and develop a large network of friends. Over the years he was an active member of the American Legion and the Montebello Elks Lodge. Most people who knew Bill would describe him as a kind and humble human being. He often described himself as “just an ordinary guy, nothing special.” Bill was a great listener, good sport, and had an infectious smile! He grew to appreciate the beauty of Oregon and being around the younger generations in his family and the OSU Beavers. He will be greatly missed by his daughter, Gwyn, his grandchildren, Callie and Evan, his great grandchildren, Genesis, Stella, Isaiah, Autumn, and Nash, along with his sister and brother-in-law, Melba & Jack, his many nieces and nephews, and his godson, David Patterson. A funeral service and celebration of life will be held in February 2019 in Southern California. In lieu of flowers, donations can be made to the American Red Cross to help the victims of recent wild fires and natural disasters.

The family of William "Bill" Warren created this Life Tributes page to make it easy to share your memories.