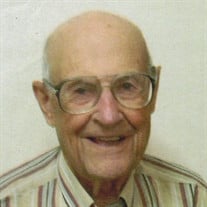 Zane Bert Lindsey of Corvallis died on August 12, 2018, following an extended illness. He was born on 9/11/1922 to Frank and Pearl Lindsey on the family dairy farm in Usk, Washington. He was the 6th of 7 children, 3 boys and 4 girls. He was married to his wife of 65 years, Harriette, who preceded him in death. He is survived by two sons, Steve (Nancy), Larry (Shirley), and grandchildren, Ben (Sara), Michael, David and Allen Schroeder and Jennifer Schroeder and numerous nieces and nephews. Zane was raised in Usk and attended Usk grade school and Cusick, Washington High School. Following graduation, Zane enlisted in the U.S. Navy. His first assignment was to the USS Detroit, a light Cruiser. His first station was Pearl Harbor, arriving there on December 1. On December 7, 1941, he was climbing the Conning Tower when enemy planes began strafing and bombing ships in the harbor. He served as Signalman on the USS Detroit, eventually gaining the rank of Chief Signalman. After Pearl Harbor he served aboard other ships throughout the Pacific Theatre. Zane also served aboard mine sweepers and other escort vessels in the Aleutian Island chain. Zane left active service in 1947 and moved his family to Glendale & Van Nuys. However, in 1962, he was recalled to active service due to the Cuban Missile Crisis. He remained in the service until 1963. He was stationed aboard the naval ship. USS Laws, DD558, a US Destroyer based out of Treasure Island, San Francisco, CA. Zane served a total of 20 years in active reserve for the Navy between his active duty assignments. After leaving the Navy, he spent a few years working in a family owned Leather Fabrication Company. In 1955, he was hired at Lockheed Aircraft at Burbank, CA. where one of his assignments was to build the cabinetry and other wooden area of the cockpit of the Spruce Goose. In 1959, he transferred to Lockheed in Mountain View, CA.. Here he worked as a Carpenter and Project Foreman, then transferred to Lockheed Missiles and Space Division as a Mock Up Engineer where he designed and built models of missile nose canes to 1000th of an inch scale for wind tunnel tests. Zane worked for 33 years for Lockheed. Zane retired to a house they built in Gold Run, CA, but was asked to return to Lockheed which he did for another 2 years. Zane finally retired and began the process of moving to Oregon to be near children and grandchildren. When they arrived in Corvallis, Zane became active in the Pearl Harbor Survivors Association and served for a number of years as both Secretary and Treasurer of the local chapter. He also served a term as President of the Chapter. He was active in the Annual Veteran’s Day Parades in Albany, Oregon, and built the float used to carry chapter members in the parades. He designed a replica of the Arizona Memorial in Pearl Harbor as the theme for the float. He requested that the float be transferred to another active chapter once there were limited members here. It is in use now by the San Diego Chapter of Pearl Harbor survivors. The cremated remains of Zane and his wife will be inurned with full military honors at the Willamette National Cemetery in Portland Oregon at a later date.

Zane Bert Lindsey of Corvallis died on August 12, 2018, following an extended illness. He was born on 9/11/1922 to Frank and Pearl Lindsey on the family dairy farm in Usk, Washington. He was the 6th of 7 children, 3 boys and 4 girls. He was... View Obituary & Service Information

The family of Zane B. Lindsey created this Life Tributes page to make it easy to share your memories.