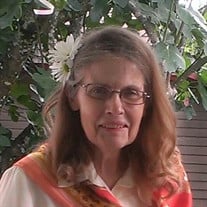 Zona Lee Bolton-Suess, 78, died October 5, 2018, in Corvallis, OR, following a long illness. She was born in Lyons, KS, June 21, 1940 to Laurence I and Mary V Bolton. She attended elementary and high school at Macksville, KS, and graduated in 1958 as Valedictorian of her class and as a National Merit Scholar. She attended Kansas State University, where she met Erwin Suess, a geologist and Ph.D. candidate. They were married in a small pioneer church near Tuttle Creek in the country outside Manhattan, KS on August 7, 1965. Because of Erwin’s expertise in marine geology and subsequently in ocean sciences, after graduating from Lehigh University, Bethlehem, PA, Zona lived and traveled the world with him for over 55 years. They lived for extended periods on Bermuda and Hawaii, in Paris/France, Hangzhou/China and Berlin/Germany. They went together on lecture tours to Japan, Russia, China and EU-sponsored events in European capitals. They settled for decades in Kiel, Germany and Corvallis, OR where they kept their principal home since 1976. Zona attended graduate classes at Oregon State University and University of Oregon. They enjoyed the rich cultural life on and off the OSU campus. Particularly in later years, chamber music, piano concerts and events by the School of Arts and Communication. Zona’s love for theater and the arts was part of her life. She and Erwin regularly visited the Ashland Shakespeare Festival. They attended performances at the Old Globe Theater in London, Zona travelled on her own to Stratford-upon-Avon, Bilbao Guggenheim and other places. More importantly though they were engaged with and followed the careers and performances of the Joplin family in-law actors Joneal, Jennifer and Jared in St. Louis MO, Cinncinatti and Dayton OH. While in Honolulu, Zona attended and graduated from the University of Hawaii with a B.A. in English on June 8, 1969. She became lecturer at the Department of Anglistik and Amerikanistik, Kiel-University from 1970-1976 and again from 1989-2004; she received language certificates in German from Goethe-Institute and in French from Alliance Française. During her employment at the university she taught multiple Writing and Translation classes and lectured on American issues of interest to German students. Zona’s favorite topics during the 1970/1971 academic year were: Black Literature and Race Relations, Women’s Role in America, American South and American Government. She put enormous effort into preparing these lectures, following her motto: If it’s worth doing it’s worth overdoing. One of these lectures during Spring Term of 1971 on Women’s Role in America was recently cited as the first university course in Germany addressing what now would be known as Gender Studies. At the 350-year anniversary of Kiel-University in November 2015 a lengthy contribution on that topic was delivered and later appeared in print. Zona was able to communicate with the author about that pioneering lecture and her experience with and feedback on the topic before Zona’s illness developed. Individual lectures, reading and background material used by Zona in Women’s Role in America provide a snapshot in time almost 50 years ago on issues currently debated around the world. The material was entirely preserved and is on it’s way from Corvallis to the Kiel-University archive. Zona was cared for with great love by staff at Willamette Springs Memory Care in Corvallis. She is survived by Erwin, her husband; her sister, Mary Jane Joplin (Joneal); her brother, Larry Bolton (Marilyn); her brother-in-law, Karl-Günter Suess (Doris); four nieces and one nephew. She was preceded in death by her parents. Graveside service will be held at the Lyons Cemetery, in Kansas, on October 20 at 3:00 p.m. Memorials may be sent to the Alzheimer’s Foundation of America in care of DeMoss-Durdan Funeral Home, 815 NW Buchanan Ave., Corvallis OR 97330.

Zona Lee Bolton-Suess, 78, died October 5, 2018, in Corvallis, OR, following a long illness. She was born in Lyons, KS, June 21, 1940 to Laurence I and Mary V Bolton. She attended elementary and high school at Macksville, KS, and graduated... View Obituary & Service Information

The family of Zona Lee Suess created this Life Tributes page to make it easy to share your memories.