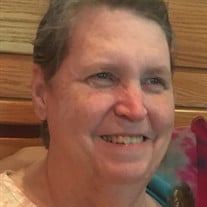 Nita Marie Lemke passed away on January 29, 2022, at her home in Albany, Oregon, of complications of vascular dementia. She was 69 years old. Nita was born in Pasco, Washington to Iona (Dimond) and George McIntyre on June 15, 1952. She spent her early years in Kennewick, Washington with her sister and two brothers. In later childhood, her family moved to Milwaukie, Oregon where she attended Milwaukie High School until midway through her senior year. During the second half of her senior year, she moved to Klamath Falls, Oregon where she graduated from Klamath Union High School with the class of 1970. Following high school, she attended the Oregon Technology Institute (OTI) in Klamath Falls, Oregon, where she met her husband of over 50 years, Michael Lemke. She used her exceptional skills as a Keypuncher to land a job at Oregon State University punching in the programs that were needed to run the computers that took up the entire basement of the Kerr Administration Building. Nita embraced the creative arts including stained glass, needlepoint, crochet, acrylic casting, pinecone wreath making, cross-stitch, sewing, and, her greatest passion, quilting. She was an enthusiastic reader and could often be seen checking out a head-high stack of books from the Corvallis Benton County Public Library. She would have these all read in a week and be eager to find time to check out more. In 1979 Nita moved her family to Philomath and started a job at the newly built Hewlett-Packard plant as an administrative assistant. She spent much of her free time supporting her children’s activities and looking for opportunities to expand their experiences at the Corvallis Arts Center, Corvallis Parks & Recreation, the Benton Center, Corvallis High School, as well as the Corvallis Benton County Public Library. It was in these experiences her children learned to share her love of arts, crafts, physical movement, and literature. In the final few years of her life, she achieved her lifelong dream of living by the ocean with her family in Gold Beach, Oregon. She was preceded in life by her mother, Iona, father, George, and brother Dick. Her husband of over 50 years had just passed away in November. She is survived by her brother Bill McIntyre and sister Sue (McIntyre) Scott, three devoted children, George Lemke, June Lemke, and Timothy Lemke, and her five grandsons Fredryk (Pete), Robert (Bob), Calvin, Michael, and Cillian. She left behind many, many adoring nieces, nephews, extended family, and countless quilting friends. She will truly be missed. On Saturday, February 26, 2021, a memorial service will be held at 1:00 pm at DeMoss-Durdan Funeral Home, 815 NW Buchanan Avenue, Corvallis, OR 97330. All are welcome. Nita will be interred at Willamette National Cemetery with her husband in Portland, Oregon at a date to be determined. Please sign the online guestbook at www.demossdurdan.com

Nita Marie Lemke passed away on January 29, 2022, at her home in Albany, Oregon, of complications of vascular dementia. She was 69 years old. Nita was born in Pasco, Washington to Iona (Dimond) and George McIntyre on June 15, 1952. She spent... View Obituary & Service Information

The family of Nita Marie Lemke created this Life Tributes page to make it easy to share your memories.